A total of 659 vehicles were detected speeding in Ireland in the first pan-European 24-hour enforcement marathon.

In the 24-hour period Gardai and GoSafe checked 98,560 vehicles. 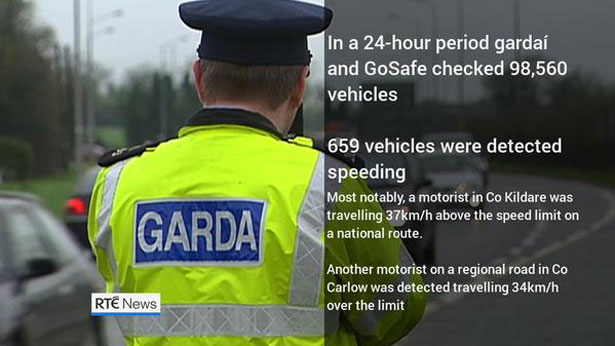 A total of 122,581 speeding offences were detected across Europe between 6am on Thursday and 6am on Friday, April 10.

TISPOL President Aidan Reid commented: “The sole purpose of our actions is to save lives on Europe’s roads. We want drivers to think about the speeds they choose; speeds which are both legal and appropriate for the conditions. We want to get into the heads of drivers, not their purses.

“It is disappointing that so many drivers failed to heed the warnings. But it is vital that we take action against those who fail to comply with speed limits.  Illegal and/or inappropriate speed is the single biggest factor fatal road collisions.