As a crucial vehicle safety feature, the wiper blade has been providing drivers with a clearer, comfortable field of vision in all weathers for over a century. Now, this could all be about to change with the development of a revolutionary vibrating windscreen. DENSO, a leading pioneer of advanced wiper blade technologies, takes a look at its humble beginnings through to today’s advanced design. 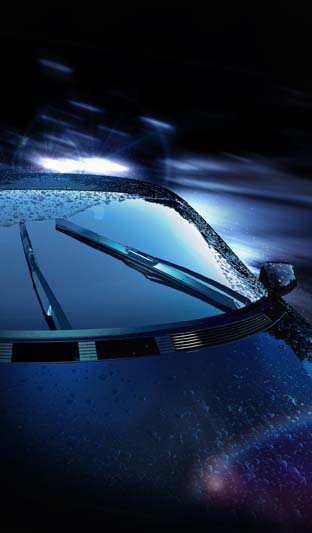 Ironically, the wiper blade is perhaps something that the vast majority of vehicle owners take for granted today, yet driving without it in wet weather significantly diminishes visibility, leading to great risks in driver and passenger safety. It would be interesting to see where we would be now had a certain Mary Anderson not made that storm-stricken trip from her home in Alabama to New York City in 1903, which led to the invention of a ground-breaking concept that would change little over the decades to come. However, could its long reign be about to come to an end, thanks to a new system to improve visibility, adapted from fighter jets?

In 1903, Mary Anderson, a woman from Birmingham, Alabama was awarded her patency for a ‘window cleaning device for electric cars and other vehicles to remove snow, ice or sleet from the window’.

The patent defined the design she conceived for a windshield wiper, following a wintry day travelling to New York City in hazardous driving conditions. She finally came up with a successful prototype: a set of wiper arms made of rubber and wood materials that was operated by the driver from within the vehicle using a lever.

Following the patency, Anderson then tried to sell it to a Canadian manufacturing firm, but she was turned down on the grounds that the device had no practical value and was therefore worthless; many claimed the device would cause a distraction to drivers. However, by 1916, mechanical windshield wipers were standard equipment in passenger cars.

The hand-operated lever system of Anderson’s patent is far removed from the wiper systems installed in most vehicles today, although the concept remains pretty much the same. Later inventors made windshield wipers much simpler to operate. In 1922, a new automatic mechanism featuring a vacuum-powered system quickly became standard equipment on vehicles; a system that was used until around 1960.

In 1963, intermittent wiper systems were being used, which were first manufactured by the Ford Motor Company. In 1970, a rain-sensitive intermittent windscreen wiper was introduced, whereby upon the selection of the intermittent function, the wiper would swipe once. Depending on whether the windscreen was dry or wet, an electric motor drew varying levels of current, which would either set the control circuit timer to delay the next wipe longest or to minimise the delay.

Nowadays, the combined advantages of advanced engineering, superior materials and futuristic design means that wiper blades, manufactured by global-leading OE suppliers such as DENSO, suit a wide range of different windscreens and vehicle styles. For example, DENSO’s use of durable, non-corrosive materials and a natural, high-compression rubber means a longer service life and its OE technology and quality guarantee a higher standard of wiping performance. In 2005, DENSO’s introduced its Hybrid Wiper Blades to the OE market, which were designed with an integrated, fully covered blade and wiper arm, with aerodynamic advantages of flat blades.

British-based motoring firm McLaren is developing a system that could wave goodbye to wipers and saying hello to ultrasonic force fields instead. Currently, there are few details available on the technology involved, but based on the patent, it is suggested that ultrasonic vibrations and high frequency sound will be used to create a wave-like movement across the windscreen which repels rain, mud, insects and other potential obstructions. Potentially, the heat created from those vibrations could be used to heat the screen, removing ice and snow. It is likely that the ultrasonic pulses would differ in size and timing, to enable the waves to clear away dirt, water and ice of varying sizes.

McLaren remain tight-lipped on when it will be put into production, although it is likely that the first cars featuring such technology will not be cheap; it has been reported that the system is expected to be first used on McLaren’s range of sports cars with a hefty price tag of between £170,000 and £870,000. However, according to some sources, once fine-tuned, they could be appearing in the mass market for as little as £10, due to a small transducer being used to create the sound waves.