If you’re an existing Farécla ‘G3 Premium’ user you may be wondering what the difference is between your current compound and the ‘G360 Super Fast Compound’, also from Farécla. In short you will experience a faster cut rate and superior final gloss. 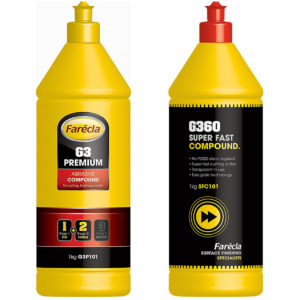 The G360 Super Fast System was developed as a system to remove the need for expensive P3000 sanding discs by providing revolutionary cutting and finishing abilities, rather than a G3 Premium replacement. That said, many G3 Premium users have switched across for the benefits the new system delivers.

It was also developed to be easy to use, offering a number of benefits over sanding beyond P1500. The G360 Compound is transparent in use, making it easy to see the defect/sanding marks being worked on and removed. Through faster polishing times, reduced steps and use of only light pressure operatives also have reduced exposure to ‘Hand Arm Vibration’ risk and muscle fatigue compared to alternative systems.

The cost savings of no longer needing the G360 Compound is one component of the G360 Super Fast System which, on the compounding side, includes the ‘G Mop Super High Cut Pad’, a revolutionary wool fibre based pad developed in conjunction with the liquid G360 Compound and a G Mop Flexible Yellow Compounding Foam for a second stage.