Bonhams is pleased to announce two additions to its inaugural Mercedes-Benz Sale on 12 July at the Mercedes-Benz Museum in Stuttgart, Germany. 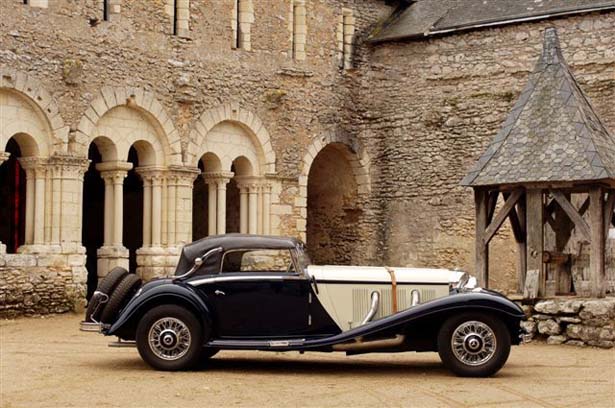 A 1936 Mercedes-Benz 540K Cabriolet with a swinging Parisian past, estimated at EU €1.8-2.4 million, and an early WW1 period 22/50hp Mercedes from 1915 with an estimate of EU €650,000-750,000, are two of the latest consignments to the Sale, which will feature a choice selection of some 40 motor cars manufactured by the renowned German marque over its more than century-long history.

This ultra rare 540K Cabriolet A, with chassis number 130946, was ordered on June 3rd 1936, and is confirmed to have been one of just ten cars which left the factory built to its particular specification and equipped with the more powerful 5.4-liter engine, but in the traditional-style body with two rear mounted spare-wheels. Its bodywork was completed at the Mercedes-Benz Sindelfingen factory.

The car was collected by its first owner in October of that same year from Mercedes-Benz Paris. Proprietor of the well-known Parisian nightclub Bar Americain ‘La Roulotte’, he would park the Mercedes out front while the venue hosted world-renowned artists of the day, such as Edith Piaf and Django Reinhardt. The car remained in his possession for over 70 years, until 2007; the car has never left French soil since being delivered new to Paris.

A stunning full restoration was carried out by the original owner, with the engine, gearbox, axles, brakes, suspension and starter all fully rebuilt. Cosmetically no details were left untouched and the car received a new top, upholstery and interior; the instruments were rebuilt and all chrome parts were redone.

Having remained in the same ownership for such a long period of time this superb Cabriolet A retains all of its original major components: chassis, engine and bodywork. The car comes with archive photographs, an original service invoice dated August 25th 1946 and a fully documented photographic restoration record, together with the relevant invoice.

The 1915 22/50hp Mercedes to be offered has a unique and comprehensively documented history. Ordered in 1915, by one of the richest men in Sweden and a business partner of Alfred Nobel (of the Nobel Prize fame), the car was built to his special modifications for use on his country estate in Belgium, particularly when shooting game. The original ‘vehicle order’ lists the requirements, such as electric starter and exhaust valve; he also had the track width of 142 cm extended to 154 cm and the suspension raised, so that on dirt roads the car would not get caught in the deep furrows created by horse-drawn carriages.

Upon its completion, the story of this car took a strange detour. With WW1 raging, rather than being delivered to the buyer, it was repossessed by the German Army, repainted grey, and used as a service vehicle for General August von Mackensen. At the end of May 1918, a new order from Sweden was placed again with a note for the car to be delivered “prompt after the war”. In April 1919, after a complete refurbishment by Mercedes-Benz, the car was shipped to Stockholm where it remained with the same owner until 1970.

Carefully restored to ‘as new’ condition by the second Swedish owner, the car retains its original coachwork and mechanical components. All renewed parts such as leather, soft-top fabric, etc. were restored to period specification and the car comes with outstanding documentary materials and photographs- even the original driver’s cap!

The Mercedes-Benz Museum maps the entire history of the world’s oldest car manufacturer with a unique variety of exhibits. A total of 1500 exhibits, including 160 vehicles, can be seen on an area of 16,500 square metres.