For many car owners, their vehicle is more than just a means of transportation. It represents a persona and a lifestyle. This emotion is the cornerstone of the new Standox annual calendar, called Cars & Characters. The photographer skilfully stages the vehicles while capturing the characters behind the wheel. 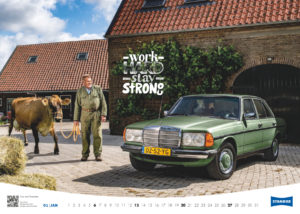 The Dutch photo studio Van der Vaart has specialised in the world of cars for 35 years. Mercedes, BMW, Hyundai, Renault, Tesla or Volvo – there is hardly a well-known car manufacturer they have not photographed. The new Standox calendar – Cars & Characters – shows each car in a typical situation with its owner, each of whom has a special relationship to their car. The emotive compositions of the images show the owners’ pride and passion for their cars and reveal a little about the person behind the wheel, too.

Work Hard, Stay Strong is the motto of the passionate farmer featured in January. No surprise then that the Mercedes W123 is his pride and joy. This amazing classic is considered almost unbreakable to this day.

The July image leaves no doubt that La Vita e Bella – or, life is beautiful. The owner’s lifestyle, which is characterised by Italian elegance, is perfectly reflected in the picture. Against the dreamlike backdrop of an idyllic coastal road, the driver enjoys the advantages of the sleek Alfa Romeo 4C, and the two merge into perfect harmony.

Two real powerhouses show the fascination with the American Way of Life in October. A graffiti-decorated brick building in a typical New York street is the backdrop to the owner, dressed in black, with heavy biker boots and tattooed arms, and his 1932 Ford Model B that was rebuilt into a Hot Rod. His life motto is Life is a Beautiful Ride, meant deliberately to be interpreted literally and figurately.

Standox has had its wall calendars created by renowned photographers for more than 30 years. They are not commercially available but go exclusively to customers and friends of the Wuppertal paint brand. Some of the images, such as the Hot Rod, can be downloaded as screen wallpaper at www.standox.co.uk/characters.