The Nuon Solar Team, sponsored and supported by AkzoNobel, has once more won the solar
car race across Australia.

The biennial Bridgestone World Solar Challenge, which started on 18 October, involves driving 3,000km from Darwin in the north to Adelaide in the south. It was contested by 42 teams from universities and schools around the world.
For the winning Nuon Solar Team, made up of students from the Delft University of Technology, there were nail-biting moments on the fourth and final day when on several occasions they almost ran out of charge due to cloud cover. As defending champions from 2013 the Nuon Solar Team won by a margin of 3 minutes 35 seconds, ahead of another Dutch team, Twente. 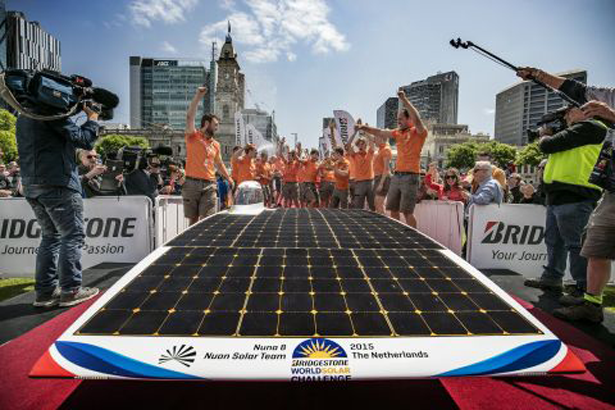 A new Nuon Solar Team is formed every 18 months to develop and race its own solar-powered car. Members come from a variety of faculties across the University, including aeronautical engineering, mechanical engineering and mathematics, and their multidisciplinary team handles the whole endeavor – from design and build, through sponsorship, communications and project management, to the race itself.
Remco Maassen van den Brink, AkzoNobel’s Vehicle Refinishes Marketing Director explains: “We are always keen to help future engineers and technicians, and to encourage cutting-edge technical developments, and we were delighted to offer our support and coatings expertise.”

This has given the Nuon Solar Team a distinct advantage: good aerodynamics are essential to the car’s efficiency and performance, so a specialized Sikkens coating was used to cover the rough surface of its carbon fiber body and create a super-smooth, lightweight finish. It took almost two weeks to complete the paint job with the Sikkens team at the company’s Automotive Training Center in Sassenheim, polishing the car until its aerodynamic resistance was as low as that of a car’s wing-mirror.

The Nuon Solar Team’s victory, in a car named Nuna8, competed in the Challenger Class, which the race organizers described as being for ‘visually stunning, slick, single-seat, aerodynamic masterpieces built for sustained endurance and total energy efficiency.’ Entrants need to comply with size and design regulations, as well as the specific rules of the race. Using a nominal 5 kWh of stored energy, the sun and recovered kinetic energy from the car, the top teams aim to maintain an average speed of between 85 and 100 km/h.

Nuna8 is the eighth car produced by TU Delft students for these friendly but competitive races – and this is the university’s sixth win.