Does this scene seem familiar to you? It’s night time on the water front … a row of run-down brownstone buildings in a dimly lit street … a loading crane and a ship moored at the quay. The camera pans to the foreground to reveal two murky figures hiding behind an enormous black car with sweeping fenders – both brandishing guns, of course.

Only very few eye witnesses are left to tell us whether or not this scene bears any resemblance to what the New York or Chicago underworld of the twenties and thirties really looked like. Nevertheless, this scene comes across as very familiar to most of us. After all, we have seen it so many times in feature films – in black and white flicks starring James Cagney, George Raft or Humphrey Bogart as well as in such full-colour motion pictures as “Once Upon a Time in America” and “The Untouchables”. Clearly, our view of this period has been influenced heavily by the artificial and often romanticised version of “reality” served up by Hollywood directors. 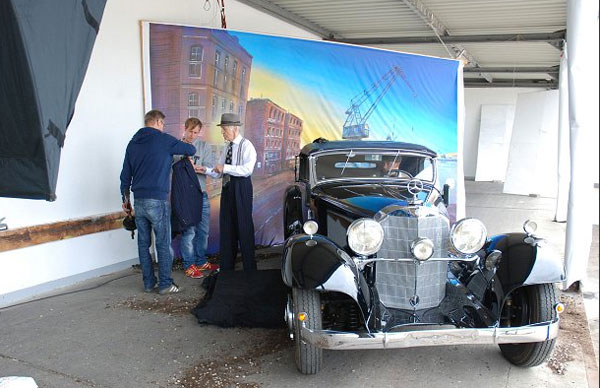 This discrepancy is explored by the December image created for the new Standox Calendar by photographer Dirk Krüll and set designer Lutz Menze. On the surface, their photo is perfectly composed to convey the desired atmosphere but on second looks viewers will find that it is all fabricated – the background is quite obviously a painted canvas and the two mobsters are just two models posing as such. Even the star attraction of the photo, the car, is not what it appears to be – it’s neither a Packard, nor a Studebaker nor a Cadillac but a 1934 Mercedes 380 A. This model is unlikely to have ever played any role in US gangster wars but it certainly looks the part here.

The car was made available by German industrialist Friedrich W. Dauphin, whose private vintage car collection can be viewed by the public in a museum built by him near Nuremberg. Some 150 cars and 250 classic motorbikes form part of this collection, whose highlights include the Mercedes starring in the “gangster shoot” arranged by Dirk Krüll.

Once again, it is the photographer’s and the set designer’s attention to details which contributes to the overall effect created by the photo. Take, for instance, the white-haired man seen on the left-hand side. He has an uncanny resemblance to Hollywood legend Kirk Douglas as he appeared in the 1986 movie “Tough Guys”. At the ripe age of 70, Douglas played an old gangster who is released from prison having served a 30-year sentence only to discover that the world as he knew it has changed beyond recognition and that he no longer fits in; he therefore decides to resume his career as a gangster.