Axalta Coating Systems, a global manufacturer of automotive coatings and an authority on colour and colour trending information for the automotive industry, announced today the publication of its annual automotive colour popularity report for 2013. 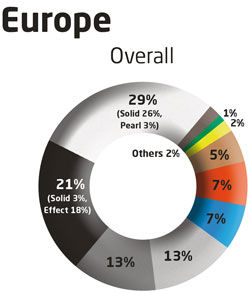 The report, produced since 1953, is the most comprehensive in the industry as regional automotive market colour preferences are continuously tracked. This year’s report includes Say it with colour! Axalta’s forecast of four colour megatrends for automotive designers around the world.

“Our customers count on our data every year to drive market decisions,” explained David Fischer, Vice President of Axalta’s global OEM business. “Our global team of colour specialists relies on our advanced forecasting to formulate the next generation of coating colours. The result is an ever-evolving colour palette for automotive designers. As the industry continues to evolve and strives to innovate for customers worldwide, Axalta is committed to partnering with our customers to provide the best possible coatings available.”

2013 World colour Highlights
White strengthened its position as the most popular automotive colour among consumers worldwide in 2013, growing in popularity by six percentage points over the previous year. Within the white space, 22 percent of vehicles were solid white and seven percent were pearl white. Black was the second most popular colour globally, with 20 percent of sales, but effect black was preferred more than solid black. Silver at 15 percent and grey at 12 percent waned in popularity, while red held steady at eight percent. Blue and brown/beige each held five percent of the global market. The remaining colour choices revealed low popularity for green, orange, purples and other colours, although there was a small increase in the yellow/gold area. Overall, neutral colours have been widely popular over the last decade and make up 76 percent of today’s vehicles.

North America
At 26 percent, white continued to increase in popularity and remained the most popular colour choice for the seventh consecutive year.
At 20 percent, black also increased in popularity as consumers gravitated toward black effects in the luxury and luxury SUV segments.
Silver has continued its slow decline along with gray.
The two most popular chromatic colours choices are red at nine percent and blue at seven percent.
Mexico prefers the lighter neutrals with white at 32 percent and silver at 18 percent.
Black falls third at 17 percent in Mexico.
Other colours in Mexico fall in line with the overall North American trends.

Europe
Preference for white increased five percent in 2013 to capture 29 percent of new car sales with solid white being the most popular variant.
At 21 percent, black was the second most preferred colour, but decreased in popularity compared to 2012.
Interest in grey and silver waned in 2013, in line with global trends.
Blue decreased slightly and red slightly increased to bring both to seven percent levels.

South America
At 29 percent, white eclipsed silver to take the top spot for the first time since 2001, followed closely by black at 14 percent.
Gray and red followed in popularity at nine percent each. Red remained the fifth most popular colour since 2002.
The prevalence of brown/beige, blue and green colours slightly increased.

Other countries and regions
In Russia, white held the top colour space at 18 percent. Green was quite popular in with eight percent of the market in contrast to other countries.
Light colour spaces dominated Africa with white, silver, and gray at the top. White had a strong lead at 43 percent. Red was the most popular non-neutral colourful preference at six percent, followed by blue at four percent.

With this wealth of knowledge on OEM colour trends, Axalta’s three global refinish brands – Cromax®, Spies Hecker and Standox – are able to react quickly. New refinish colour formulas are created very fast and delivered to the refinish brands’ bodyshops via the innovative colour-matching tools. For these bodyshops, immediate access to refinish colour and repair techniques is vital to ensure productivity and correct-first-time repairs.

Fischer says, “The seamless links between Axalta’s OEM and global refinish businesses is underscored by the drive and enthusiasm behind our people. The speed with which refinish colours are introduced to the market, illustrates Axalta’s on-going commitment to its customers to be built for performance.”