Bodyshop.ie has learned that Bill Cullen has re-entered the Irish motor trade. The former Renault CEO and one of Ireland’s best known business personalities has opened a new showroom on the Naas Road, in Dublin. And he has been appointed an official dealer for the SsangYong franchise. 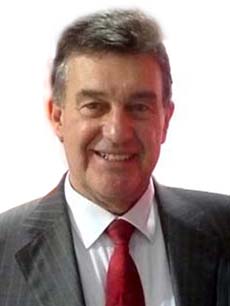 His dealership, named ‘Bill Cullen Premier Motors’ will stock the Korean range of SUVs as well as a variety of used cars.

‘I am delighted to be back,’ said Bill. ‘I’ve been itching to get back into the motor trade for some time. I had noticed that SsangYong had a new range that was performing well in other markets and when I spotted that it had entered the Irish market I knew it was time to make a move.’

Bill and his partner Jackie have recruited a team of sales people and servicemen. Their new showroom, which is located on the Dublin city end of Naas Road, opposite Brooks, spans over 950 square meters. It has been transformed in a matter of weeks and now aims to serve Dubliners and commuters from the surrounding counties.

‘We are in an excellent location with easy access from the M50 and the red Luas line going by our door – we’re a stone’s throw from the Bluebell Luas stop. Both used car buyers and people interested in the new SsangYong range now have a new destination to come to and as of today Bill Cullen Premier Motors are open for business.’

Speaking about what attracted him to the Korean franchise, Bill said, ‘SsangYong are a very ambitious car brand and the new range features efficient, powerful engines and a sleek design that will appeal to Irish car buyers. I’m also very pleased with the five year warranty and five year road side assistance across the ranges. I can see this range appealing to families, individuals and business owners alike – particularly since the SsangYong Korando Commercial had been voted Irish Continental Commercial SUV of the Year 2014.’

Joe Harris, CEO SsangYong Motors Ireland said he was thrilled to have the well accomplished business man on board. ‘Bill has been a cornerstone and pioneer of the Irish motor trade for many years and his personal and professional achievements are second to none. We are delighted to have a person of such incredible achievements and his excellent team on board and we are confident that this appointment will see the SsangYong brand continuing to go from strength to strength.’