Hollywood did it first: in the 1980s, the dream factory created the action series ‘Knight Rider’, featuring a speaking and – more importantly – self-driving Pontiac Firebird Trans Am named K.I.T.T. Nearly 30 years later, automated driving is no longer just another TV fantasy. “Bosch is making science fiction reality, one step at a time,” says Dr. Dirk Hoheisel, who sits on the Bosch board of management. Cars equipped with Bosch technology can already drive themselves in certain situations, such as in traffic jams or when parking. Bosch will be presenting its solutions at the Vehicle Intelligence Marketplace during the CES in Las Vegas (January 6-9, 2015).

As one of the world’s largest providers of mobility solutions, Bosch has been working on automated driving since 2011 at two locations – Palo Alto, California, and Abstatt, Germany. The teams at the two locations can draw on a worldwide network of more than 5,000 Bosch engineers in the field of driver assistance systems. The motivation behind the development at Bosch is safety. Worldwide, an estimated 1.3 million traffic fatalities occur each year, and the numbers are rising. In 90 percent of cases, human error is the cause. 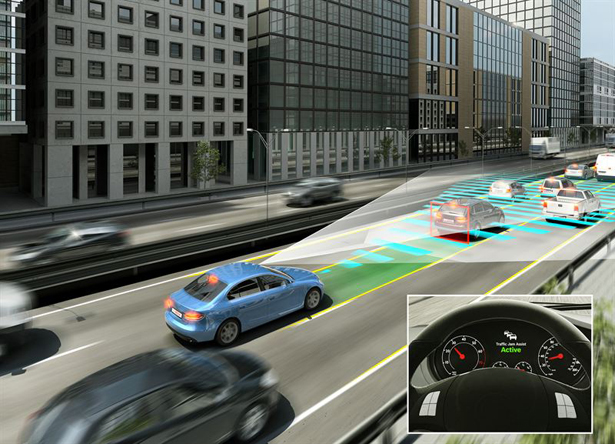 Relieving drivers of driving tasks in critical traffic situations can save lives. Studies suggest that up to 72 percent of all rear-end collisions resulting in casualties could be avoided if all cars were fitted with the Bosch predictive emergency braking system. Drivers can also reach their destinations safely and with minimum stress using the Bosch traffic jam assistant. At speeds of up to 38 miles per hour, the assistant brakes automatically in heavy traffic, accelerates, and keeps the car in its lane.
“With driver assistance systems, Bosch expects to generate sales of one billion euros in 2016,” Hoheisel says. Assistance systems are the cornerstone for automated driving, which will become established in a gradual process. Bosch already has its sights on highly automated driving, in which drivers no longer have to constantly monitor the vehicle. “With Bosch highway pilots, cars will be driving automatically on highways by 2020, from entrance ramp to exit ramp,” Hoheisel predicts. In the decade that follows, vehicles will be fully automated, capable of handling any situations that arise. 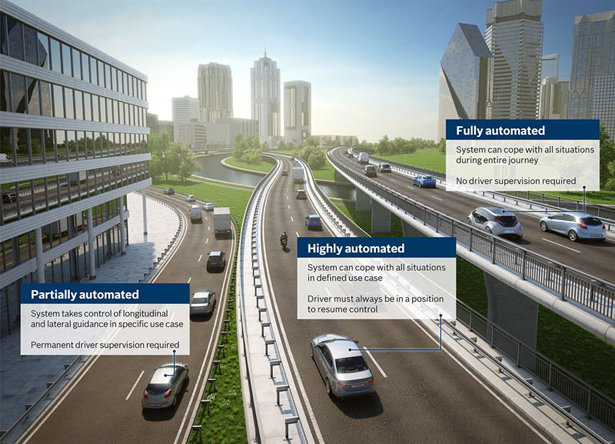 Bosch sensors are the car’s eyes and ears

Automated driving affects every aspect of the car – powertrain, brakes, steering – and requires comprehensive systems expertise. It is based on sensors featuring radar, video, and ultrasound technology, sensors Bosch has been manufacturing by the millions for many years. “Sensors are the eyes and ears that let vehicles perceive their environment,” Hoheisel says. Powerful software and computers process the collected information and ensure that the automated vehicle can move through traffic in a way that is both safe and fuel efficient.

As vehicles gradually take over more and more driving tasks, safety-critical systems such as brakes and steering have to satisfy special requirements. Should one of these components fail, a fallback is needed to ensure maximum availability. Bosch already has such a fallback for brakes: the iBooster, an electromechanical brake booster. Both iBooster and the ESP braking control system are designed to brake the car – independently of each other – without the driver having to intervene.

In this way, the Bosch iBooster meets an essential requirement for automated driving. The brake booster can build up brake pressure independently, three times faster than an ESP system. If the predictive brake system recognises a dangerous situation, the vehicle stops much faster. At the same time, the iBooster can also provide the gentle braking required by the ACC adaptive cruise control, all the way down to a complete stop. Moreover, it is practically silent.

The iBooster is also a key component for hybrid and electric cars. One reason is that it does not require a vacuum, which otherwise has to be generated in a complex process by the combustion engine or a vacuum pump. Second, because in conjunction with ESP hev (designed specifically for hybrid and electric vehicles), the brake booster can recover nearly all braking energy and convert it into electricity, which extends the e-vehicle’s range. Thanks to the iBooster, nearly all typical traffic delays can be used to recover maximum braking energy for the hybrid or electric vehicle’s electric motor. If the car has to brake sharply, or if the generator is unable to provide the necessary brake torque, the brake booster generates any additional brake pressure required in the conventional way, using the brake master cylinder.

Automakers worldwide appreciate Bosch technology and expertise, as was recently demonstrated when the electric car manufacturer Tesla presented Bosch with its Excellent Development Partner award. And at the CES in Las Vegas, Bosch will not only be presenting its extensive product portfolio for driver assistance functions and braking systems at the Vehicle Intelligence Marketplace. The company will also be exhibiting a true Hollywood legend: K.I.T.T. from the action series ‘Knight Rider’.