Mirka is set to feature several products at Ligna in Hannover, Germany from May 27-31.

The company will present some of the classics, such as Abranet, the original net sanding paper that revolutionized the dust-free sanding, as well as the Mirka Deros, the first electric random orbital sander to use a DC brushless motor.

In addition, Mirka will present some of its newest tools such as the Mirka Deos 663 CV Delta and the Deros 325CV & 350CV. 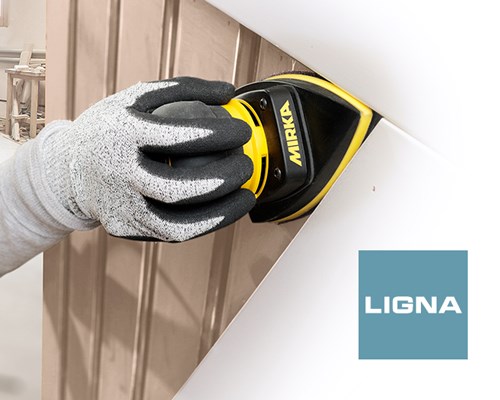 The Mirka Deos 663 CV Delta helps you to reach into the tightest corners with its triangular shape. Weighing less than a kilo (2.1lbs), and its low profile brings you 30 per cent closer to the sanding surface when compared to other delta sanders. With a 3mm orbit, Mirka says that you’ll achieve 50 per cent more stock removal over your typical competitive delta sanders.

Completing the Mirka Deros tool portfolio, two 77mm (three inch) models with a 2.5mm and 5mm random orbit options will be introduced. The Deros sanders share the same great qualities, features and low vibration benefits. The small, low profile of the sander helps to minimize the need and effort when it comes to hand sanding.

The newest additions to Mirka’s sanding portfolio, the Mirka Iridium and the Mirka Novastar can also be tested on its stand.

Mirka will also have some grinding wheels that can be used for grinding on its stand e.g. circular saws, band saws, milling tools, knives and profiled tools.

Thanks to Mirka’s intelligent Bluetooth power tools and the myMirka app, you can monitor sanding speeds as well as see instant vibration exposures during the whole sanding process. In-app purchases can also provide you with data such as running hours, motor temperature and other predictive maintenance indicators for your tools. The myMirka app can also register and keep track of warranty, after sales and service for your Mirka power tools.