“Car and Culture” is how designer Lutz Menze and photographer Dirk Krüll describe the concept for the . It is based on the idea that fashion trends and current culture profoundly influence the design of cars and so they reflect the spirit and collective state of mind of the era in which they were produced.

For the 12 photos of the 2013 Standox calendar, Krüll and Menze sought inspiration from a variety of sources: architecture, music, movies, fashion and advertising. Even contemporary art and historic events such as the lunar landings of the late 1960s and early 1970s have been drawn on. Each photo contains elements of the respective era in which the classic cars were built – sometimes directly, sometimes hidden, and often with a tongue-in-cheek irony. 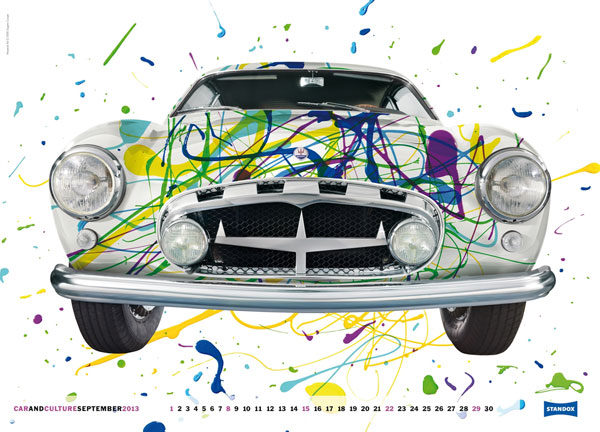 The August 2013 image, for instance, which shows a beautiful Renault Floride convertible, pays double tribute to the works of painter and photographer David Hockney. It reflects Hockney’s famous swimming pool series from the 1960s and combines that with his Polaroid collages from the 1970s, which were controversial at the time.

The September 2013 photo also pays tribute to a great painter. It shows a dream car of the 1950s, a Maserati A6G Coupé with a body created by Milan-based design house Zagato, with colourful artwork in the style of Jackson Pollock.

Every image, with its high quality and sophisticated design, effectively underlines the Standox motto The Art of Refinishing and the impeccable standards of the Standox brand. The calendar is not only a treat for all lovers of vintage cars but also an invitation to decipher the hidden messages about the events and popular culture of each depicted era.

Standox calendars are highly sought-after, and the quality of their images is reflected in the awards and prizes they receive. The 2012 calendar recently won a major US international photography award – its third this year.

The Car and Culture calendar is, as always, printed as a limited edition. Members of the Standox System Tools Plus programme will automatically receive their copy in the coming months.

For more information on the 2013 calendar, System Tools Plus membership or any other Standox products or services, contact your local distributor or visit www.standox.co.uk