The CD Group is partnering with Ulster Rugby as official sponsors of the Ulster ‘A’ team known as the Ravens, that compete in the Inter-provincial series and the British and Irish Cup. The new two year deal will see The CD Group logo feature on the front of the Ravens jersey and also at Ravenhill Stadium until the end of the 2015 season.

With locations in Dublin, Cork and its head office in Mallusk, Co. Antrim 2013 marks the Group’s 50th anniversary and Ken Knox, Managing Director, is delighted to be able to celebrate with this new venture. “The CD Group was started in Belfast in 1963 and has remained in the Knox family throughout the past 50 years. We are very proud of our heritage and are extremely thrilled to forge this relationship with Ulster Rugby at such an exciting stage of the club’s development.”

Business Development Manager, Phillip Polack, is looking forward to developing Ulster Rugby’s relationship with the CD Group. “Ulster Rugby are proud to announce this partnership. The CD Group and Ulster Rugby make a great fit as both brands are leaders within our respective industries and are focused on working together to achieve common business objectives”. 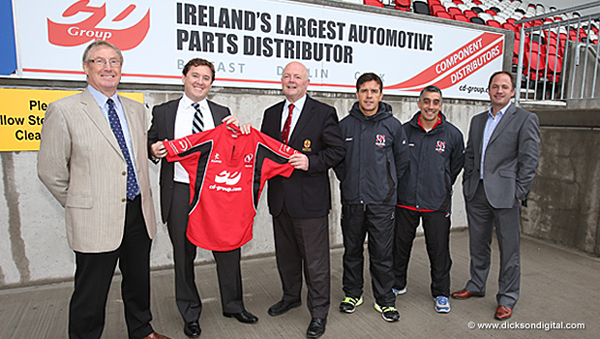