The winner of a vintage car restoration project featuring two Renault classics is set to be announced at the Goodwood Revival meeting in West Sussex this weekend.

Groupe CAT commissioned two of its expert teams to bring a celebrated Renault 4CV and Caravelle back up to speed for the annual event at one of the world’s most magical circuits from September 14th-16th. Goodwood Revival is widely regarded as the biggest and best historic motor racing party of the year and the only event of its kind to be staged entirely in the nostalgic time capsule of the 1940s, 50s and 60s. 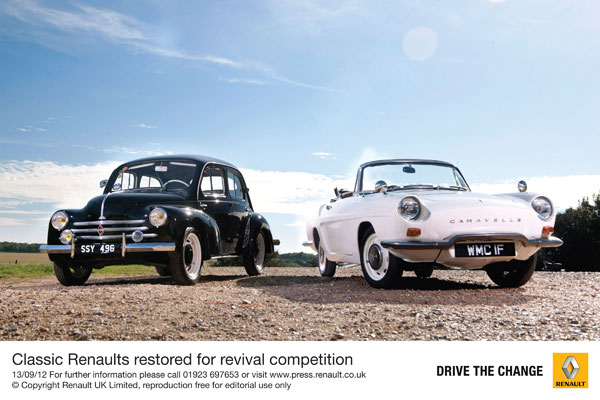 The 4CV, the first French car to sell over a million units, has been brought back to peak performance in Teesport, Middlesbrough. Once the most popular car in France, and known affectionately as the ‘quatre pattes’ (four paws), it was also easily modified and used extensively as a racing car, winning both the Le Mans 24 Hours and the Mille Miglia.  At the other end of the country, a team in Southampton have been working on the Sixties classic roadster Caravelle which continues to turn heads at motorshows with its sleek appearance and timeless appeal.

Each team’s entry can be viewed at the Groupe CAT stand with judging set to take place at 3.30pm on Friday 14th September. Following this, the vehicles will be open to serious offers from collectors and enthusiasts on the day, but, ultimately, the vehicles will be sold with the net proceeds going to the centres’ nominated charities.

CAT business unit director Stuart Warren said: “The team spirit which has developed for all of the centres taking part has been truly invaluable and judging an outright winner from such quality entries will be very a difficult task indeed. The competition has brought an additional sense of community to each team, providing excellent opportunities for our apprentices and other technicians to further develop and enhance skills, methods and techniques needed in every-day operations.”

The competition was devised to challenge the competing teams, with the BMW restored in Thorne, near Doncaster, and Beetle in Brussels, on their innovation and ability, their attention to detail, overall cost management and team-effectiveness. The journey has been one of constant evolution with all four vehicles needing to be mechanically sound, roadworthy, and MOT (or equivalent European standard) certificated by the end of the project.

And, with the cars now all in pristine condition, the results are set to be revealed at Revival, which offers visitors the opportunity to step back in time to join racing luminaries including Sir Stirling Moss, Richard Attwood, John Surtees and Derek Bell in an unashamed celebration of vintage motoring. For more information and to book tickets visit www.goodwood.co.uk/revival.