When it comes to operating an angle grinder to cut metal, many variables are at play, including selecting the suitable abrasive and effectively operating it. Here Abcon Industrial Products offer five tips to improve cutting performance with angle grinders. 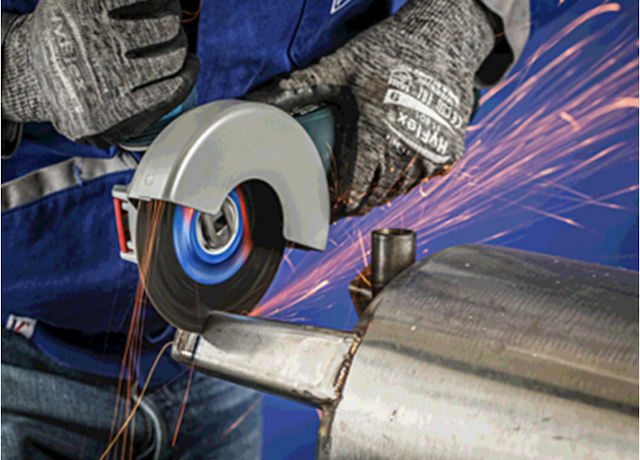 While each operator’s skill level and technique are unique, there are a few typical errors to avoid while using cutting wheels that can reduce wheel performance and life. Operators can enhance the performance and efficiency of their cutting wheels by following a few recommended practices. Here are some tips and suggestions that can help increase productivity and save time and money when carrying out metal cutting applications.

1. Use motion through the cut

Knife blades are similar to cutting abrasives. When downward pressure is used instead of slicing, the excess pressure causes the blade to dull much faster. Abrasive grains can be compared to this. It is more beneficial instead to use a sliding or rocking action in the direction of the cut, rather than straight down, to move the wheel into and through the workpiece rather than trying to force it through. This will keep friction to a minimum and help maximise the life of the wheel.

2. Don’t use excess force
As previously mentioned, pushing too hard when operating an angle grinder will dull the blade of the wheel much faster. While it might be natural to want to use a lot of force to carry out tasks quicker, increased force doesn’t actually lead to improved cutting speed, and instead just leads to a buildup of heat and friction. The operator should instead let the wheel do the majority of the work in the cut as this will maximize cutting performance.

3. Properly clamp the workpiece
Metal can easily shift and slide about when the workpiece isn’t correctly secured to a work surface while the operator is cutting it. A clamp that is too far away from the workpiece’s cut line might cause more vibration, which can bind or damage the wheel. Because of this, it is important for the operator to clamp the piece at a level that will provide the most comfort and safety to them and that they can best control the piece at.

4. Follow the direction of rotation
A directional arrow is marked on the head of every right-angle grinder to show the direction the wheel is rotating when in operation. It’s critical to orient the cutting wheel so that it spins toward and pulls itself into the workpiece rather than away from it for best results. This permits the wheel to cut faster and with less effort on the operator’s part. It is important to note that die grinders usually don’t have a directional arrow, so operators using a die grinder with a cutting wheel should pay extra attention to the direction the wheel is spinning.

5. Choose the right wheel thickness
The thinner the face of the cutting wheel, the smoother and faster it will track in the cut. A thicker wheel will cut slower but last longer, particularly when cutting harder or thicker workpieces. Choosing the right cutting wheel for the job often depends on the goals of the operation. If cut speed is most important, the operation will likely have to compromise a little on product life — and vice versa.

Regardless of the type of cutting wheel chosen for cutting, understanding how a cutting wheel is supposed to be used and following basic best practices for technique can help extend operator safety and product life, as well as maximize cutting performance and outcomes.

As all of the cutting disc are shipped from Abcon’s factory in Cootehill, Co. Cavan, so it’s Irish customers can enjoy fast lead times with no unexpected delivery or customs charges or paperwork.