The UK’s biggest and best event for the road transport, distribution and logistics industries is now open for visitor registration via the official website www.cvshow.com

The 2016 Show, which takes place at the NEC, Birmingham, from 26-28 April, has already attracted close to 400 exhibitors, a number that’s set to grow further in the weeks leading up to the event. 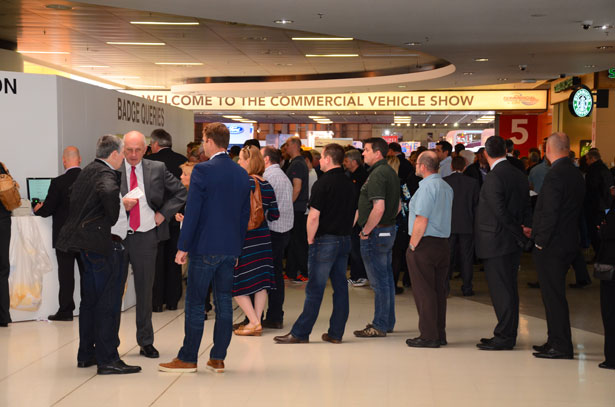 With over 19,500 visitors attending CV Show 2015, the event remains the ‘go-to’ event for anyone involved in operating commercial vehicles, logistics and distribution based businesses.

The Show is unique in that it provides visitors with the opportunity to fulfil all of their sourcing needs under one roof. From truck, van, trailer and fork lift manufacturers through to the ancillary service providers that include insurers, finance companies, tyre manufacturers, telematics and training providers, along with fuels and lubricants suppliers, the show is the perfect business-to-business environment for any individual or company involved in road transport.

New vans will be a major draw at the 2016 Show, with key manufacturers such as Citroën, Fiat, Ford, Isuzu, Iveco, LDV, Mitsubishi, Peugeot, Toyota and Volkswagen already committed to the event, offering one of the broadest exhibitions of Light Commercials since the Show’s inception.

In addition, CV Show 2016 promises the largest number of trailer and tanker manufacturers on display for nearly a decade.

Following the continued success and popularity of two specialist sectors, the Show will once again feature Workshop and Cool Zones, which will be features in themselves.

Workshop, in Hall 4, will be the shop window into a massive range of products covering everything from OE components and replacement parts to maintenance management systems, garage, workshop and bodyshop equipment.

Similarly, a huge range of refrigerated vehicles and bodywork, side by side with the latest fridge units, monitoring equipment and other products specific to cold chain operations will be found in the Cool Zone in Hall 3a.

CV Show Director, Rob Skelton, said: “In 2015, the Show was a massive success and saw an impressive increase in visitor numbers. Several key deals were done during the event, and we had some fantastic feedback from both exhibitors and visitors alike.

“In 2016, we’re looking to build on this and make the CV Show more effective and busier than ever – we’d encourage visitors to register now to avoid queueing, and also receive important updates in the run-up to the event.”

Visitors wishing to register for attendance at the Show can now do so at www.cvshow.com.