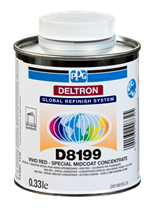 This new concentrate from PPG has been manufactured using the latest developments in colour technology and contains a special pigment that gives the best possible refinish match to the very clean candy apple red colour from Ford.

The Ruby Red colour which has recently launched on the new Ford Mondeo was jointly developed by PPG Industries Automotive Business and Ford Motor Company. Through maximising synergies and utilising expertise from its OEM business the PPG Automotive Refinish business is pleased to have launched D8199 Deltron Vivid Red Special Concentrate which gives bodyshops an accurate match to the OEM standard Ruby Red (RR).

The Vivid Red Special Concentrate from PPG is suitable for use over both our ENVIROBASE® High Performance and Deltron basecoat ranges.

This is another example of how PPG maximises the synergies of its Automotive and Refinish businesses to ensure PPG bodyshops customers are able to match any car that enters their bodyshop.