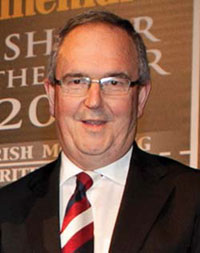 Commenting on his decision to retire Mr. Shannon said: “I am fortunate to be able to say that I have had a truly fulfilled career in the Irish Motor Industry over the past almost 40 years. I have enjoyed some wonderful successes with the Toyota Ireland brand but above all I cherish the opportunity I was given to meet truly extraordinary people right across the industry and to make lifelong friendships within Toyota and throughout our dealer network.”

Donal O’Callaghan, Chief Executive, Killeen Group Holdings, owners of the Toyota and Lexus franchises in Ireland, added: “Dave Shannon has made an enormous contribution to the success of Toyota Ireland over the years. He is a major figure in the Irish motor industry and will be missed by all for his vast knowledge of the business but above all for his intuitive understanding of the business and his ability to make sound business decisions and seize business opportunities.”

“We wish Dave every success and a full and rewarding retirement following his many years of dedication to this company and the motor industry as a whole.”

Mr. Shannon will continue as an advisor to Toyota Ireland following on his retirement at year end.