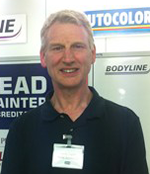 Eight of the top painters from the programme were invited to Thatcham Automotive Academy on Thursday 6th June to compete to win the LPAC champion title.

The painters completed several stages of assessment testing skill areas from application and colour matching to polishing and health and safety.

The final task saw the painters produce stunning effects by masking off and polishing an individual custom design into Matt Clearcoat panels. Health and Safety was observed and scored throughout the day.

All of the eight finalists were strong performers and demonstrated an exceptional level of skill, but there was one clear winner who achieved a tremendous score of 286 out of a possible 300.