Enterprise Rent-A-Car has been named as the official car partner of the Rugby Legends Cross Atlantic1000 Cycle 2015 which takes place from September 5-11. 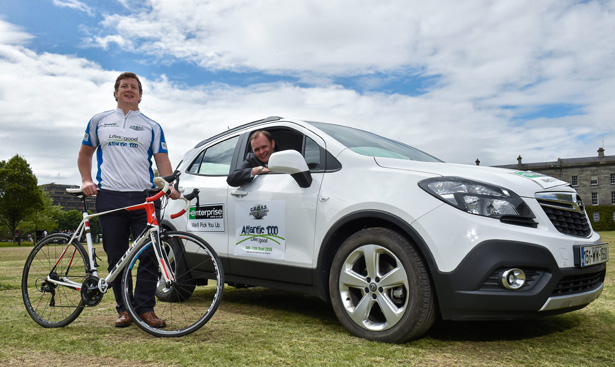 Led by former Ireland International and Lions Player Paul Wallace, the Atlantic 1000 cycle, now in its fourth year, will take place over seven days covering 1,000km aCross the Wild Atlantic Way. Rugby greats from both hemispheres will join over 200 cyclists over the week, with all funds raised supporting cancer research at Trinity College Dublin.

Kicking off in Skibbereen in West Cork, the cyclists will cover over 100km a day with the tour finishing up on September 11 in Donegal town. Enterprise Rent-A-Car will provide two pace cars that will lead and guide the peleton throughout the tour as well as a number of support vehicles including paramedic cars and rugby legend shuttle cars.

Commenting at the announcement of the sponsorship, George O’Connor, Managing Director, Enterprise Rent-A-Car Ireland said: “We are delighted to be partnering with Paul and the Rugby Legends for this brilliant initiative in supporting the Cross charity and cancer research in Trinity College, helping to find new ways to treat and prevent cancer. There are now nine local Enterprise branches dotted along the coastal route, from Tralee to Galway right up to Letterkenny and Donegal and on behalf of all our Enterprise colleagues we are delighted to welcome the tour to the region and to cheer on the cyclists as they make their way along the beautiful west coast of Ireland.

At the launch, Paul Wallace, Cross Patron said, “It’s great to have Enterprise on board for this year’s Cross Atlantic1000 charity cycle. I have no doubt that they will be a valued extension to the team in the run up to the staging of the event and over the seven intense days and we greatly appreciate their support. The initiative is an opportunity for people to get on their bikes for a great cause. Over the last three years we have raised over 225K for Professor Reynolds and his team of researchers in Trinity and this year we hope to go one better. Cyclists of all levels can sign up to join the legends and the peloton for any of the one day stages or cycle the full tour and take in all the scenic views along each stage.”

In previous year’s rugby legends such as David Campese, Serge Betsen, Tom Shanklin, and John Smit have joined the Wallace brothers and a host of Irish Internationals and 2015 promises to have even more legends join the peleton.

Entry fee for the Cross Atlantic1000 is €290 per stage, or €1,500 for the full tour, which includes accommodation, meals, return transfers and cycling kit. For more information about the event, or to register for a stage please go to www.Crossatlantic1000.com