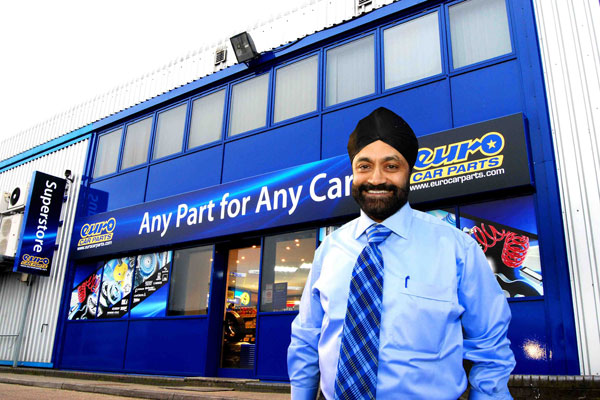 Just last week, Sukhpal Singh Ahluwalia, Founder & Managing Director of Euro Car Parts outlined the next phase of its UK network expansion and how it would create over 1,500 new full time jobs over the next 12 months. It opened 40 new branches and employed more than 2000 staff during 2012

New stores will open in Barnsley, Broadstairs, north Cardiff, Harrogate and Newbury ‘in the very near future’, and a further 10 branches will open during Q3 and Q4, bringing the total additional openings for 2013 to 15, and more in 2014. Locations and opening dates will be announced in due course for the other locations.

People Director at Euro Car Parts, Martin Gray, told the media: “For many companies such an expansion would constitute a five-year plan; at Euro Car Parts our philosophy is ‘ faster, smarter, bigger and better …….Together ’ .

Singh continues: “We make around 48,000 deliveries to UK garages every working day (that’s one every 1.35 seconds) while our expansion into Europe through Sator is exciting, we will continue to be judged primarily on our performance here in the UK. We have increased our network from 90 branches in 2011 to 132 today by being dynamic and maximising everything we take on, this is just one more piece in the puzzle”

“What sets us apart is our successful fusion of strong financial and operational control with entrepreneurial flair. Many new employees refer to the freedom they enjoy at Euro Car Parts. The attitude has to be ‘get on and do it’ at every level. In return we recognise, reward and empower talented individuals.”

Established over 35 years ago to supply BMW, Mercedes, Porsche and VW parts, Euro Car Parts is now the UK’s leading distributor of parts for all cars and light commercial vehicles. It now stocks 130,000 part numbers with never less than 98% availability for same day delivery. The company says that their success is built on great service, unrivalled availability and unbeatable prices.

Since joining with LKQ Corporation in October 2011, Euro Car Parts has hit the accelerator on all existing projects and entered many new markets. It purchased cooling technology specialist Autoclimate last February, before it merged with Netherlands-based Sator in April this year (2013) to create one of Europe’s largest parts organisations. It now has 5,500 employees.