The European new car sales market is showing no sign of slowing down with July’s sales up 5.4% on the same period last year according to the latest analysis from JATO Dynamics.

The majority of Europe’s biggest markets saw positive growth for the month and the five largest markets have all grown year-to-date.

Out of the 29 countries analysed, 22 record year-on-year increases in sales 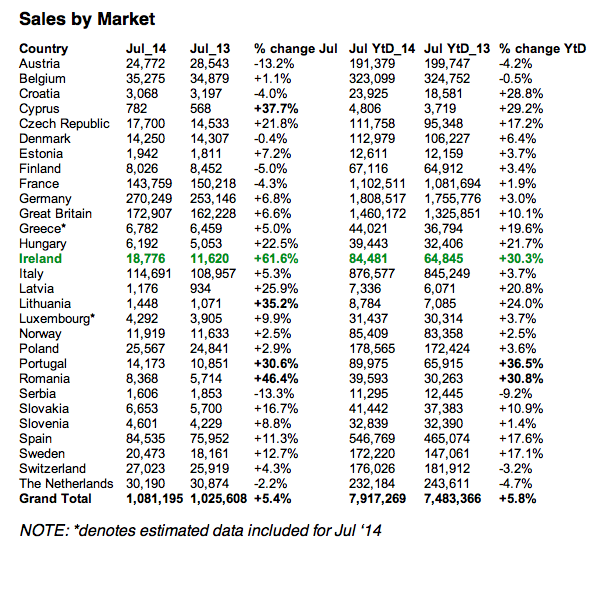 Nine of the top 10 brands increase sales compared to July 2013
Skoda was the best performer in the top ten with a 27.8% increase compared to the same month last year

Europe’s largest markets continue to grow, with four out of the ‘Big 5’ recording significant year-on-year growth. Spain saw the best performance, where government incentives led to double-digit growth of 11.3% for the month. Great Britain (+6.6%) and Italy (+5.3%) also performed well during July, while Germany returned to growth of 6.8% following a slight fall in June. France saw a sales drop of 4.3% but growth remains up 1.9% on year-to-date sales. 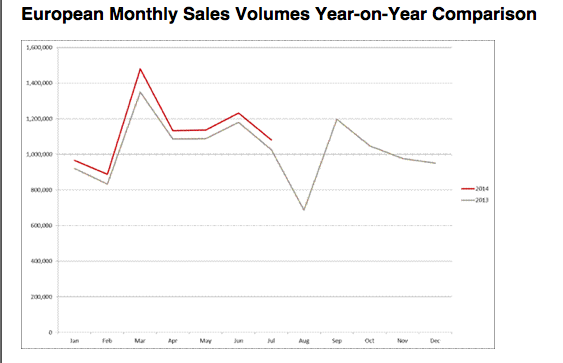 Out of the countries studied, 22 of the 29 registered growth compared to July last year. Sweden continues to impress with sales growth up 12.7% on the same month last year and a 17.1% increase year-to-date. Elsewhere, the Czech Republic recorded another month of double-digit growth, with sales increasing 21.8% year-on-year and Switzerland started to reverse its year-on-year decline with growth of 4.3% compared to July last year.

Monthly sales for July increased considerably from last year in Ireland (+61.6%) and Portugal (+30.6%), although both markets started from a low base. Ireland benefitted from a split registration system, which gave consumers a better choice in buying their new car mid-year rather than during the busy first quarter.

Volkswagen remains the top European brand by sales, with growth of 8.1% compared to July of last year. Volkswagen’s market share increased on the back of an impressive performance from their flagship Golf model. The new Golf Sportsvan also performed well and the Tiguan remains popular, both helping to boost sales.

The top 10 brands have all grown their sales year-to-date and all but one saw a sales increase in July. Skoda, helped by strong sales of the Octavia (+34.9%), claimed ninth place with an impressive 27.8% increase in July; this brings Skoda’s year-to-date sales growth to 19.4%.
July also saw increases for BMW (+9.1%) and Opel/Vauxhall (+8.0%). Opel/Vauxhall was helped by strong sales of the Mokka while BMW benefitted from the release of new body types for its new 4-series.

The Volkswagen Golf remains the top selling model in Europe and led the way for Volkswagen with a sales increase of 10.9% for July and 13.7% year-to-date. Audi’s A3 recorded a 23.0% increase in sales for the month, putting its year-to-date sales at +29.3%.

Outside of the top 10, Skoda’s impressive month saw a sales increase for both their Rapid and Yeti models while the Fabia also performed well, with sales almost level with last year despite serious competition in the B-segment.

Compact crossover vehicles such as the Dacia Duster (+85.5%) and the Opel/Vauxhall Mokka (+62.4%) proved to be popular choices during July. This segment also saw another surge in demand for the newly introduced Renault Captur and Peugeot 2008.

Gareth Hession, Vice President of Research at JATO Dynamics, commented: “Based on this month’s performance there are no signs that the European new car sales recovery is slowing down. Gains remain steady across most European countries, particularly amongst a number of key larger markets, and I expect this to continue in August, therefore delivering a full year of overall sales growth.”