The amount of Fake NCT certs in circulation on Irish roads is on the increase. With sources saying that scam artists can take a car that is only worth €300 and then re-sell it for up to €1,200, it’s hardly surprising that fake certs are on the rise.

My Vehicle has spoken to a source who claims that a fake NCT cert can be bought for as little as €50. The source who cannot be named sells fake NCTs and claims that the demand for the certs usually hit around several a week. 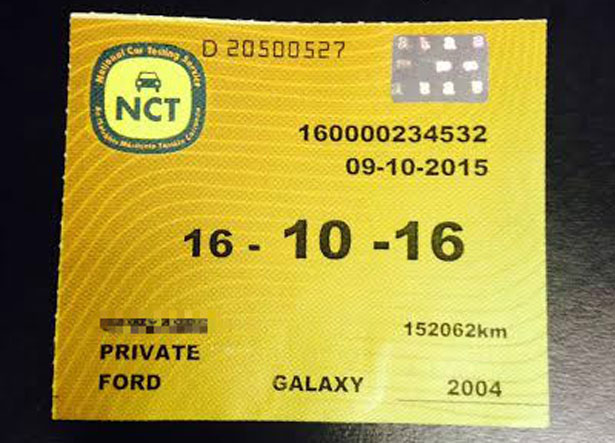 When asked what the difference is between the fake NCT and the real one the source claimed: “Very little. We can put whatever expiry date and mileage is asked for. The NCT Certificate number is obviously made up also.

The source also claimed the main reason that people used fake NCT certs was to re-sell the car at a higher cost than the car is worth, “I normally supply people trying to sell their car and the NCT cert helps them do that.”

Data gathered from a study My Vehicle ran shows that from the reports they ran on cars 19.8% cars had invalid NCTS.  These NCT certs are on cars that people are trying to privately sell.

We have also attached a picture of one of the fake NCT discs that are currently in circulation, this cert has been ran through a car history report and it has shown that it is a fake. The car that had this cert on it was being privately sold as a “good family safe car.” The asking price on Done Deal was €1,350.

My Vehicle also managed to get a copy of a fake NCT cert to show just how hard it can be to tell the difference between a fake NCT and the real deal.

Speaking about the Fake NCTS, Justin Kavanagh, managing director of MyVehicle.ie said:  “It’s extremely worrying just how easy it now is to obtain a Fake NCT Certificate in Ireland, and an even greater concern is that the individuals that are purchasing vehicles with these fake NCT certificates are putting way too much trust in the NCT Certificate, by expecting a vehicle to be mechanically sound because it has apparently passed the National Car Test and trusting the mileage reading that is printed on the NCT Certificate, which in my opinion is not wise.”