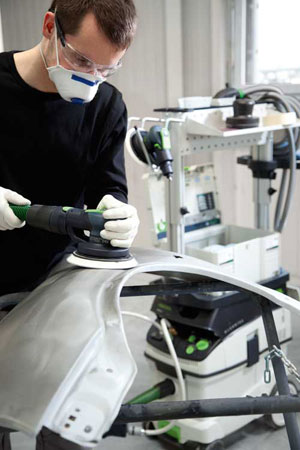 Festool describes the new system as therevolutionary compressed air solution of the future. The robust system ensures smooth working processes and high throughput while at the same time reducing costs!

In the compressed air sector the LEX Generation is unrivalled in terms of energy efficiency and reduces the majority of operating costs straight away, Festool says.

Hidden costs as a result of reworking, machine downtimes or inefficient work processes are also minimised. Because this system covers everything from A to Z. Also the comfort of the worker – with more flexibility and quiet tools with fewer vibrations.

The LEX generation is described as an extremely longlife compressed air system with low compressed air consumption, oil-free motors, low vibration and noise values and a patented, integrated extraction system. This way you work more profitably and are well equipped for the future.

Compressed air systems are con-sidered energy guzzlers. Not the LEX Generation: With the lowest compressed air consumption among sanders of this type you save up to 30 per cent on energy costs every year. And the robustness reduces the service costs, Festool says.