Ford’s groundbreaking inflatable rear seatbelt, which combines the attributes of an airbag and a conventional seatbelt – will make its European debut next year on the all-new Mondeo. 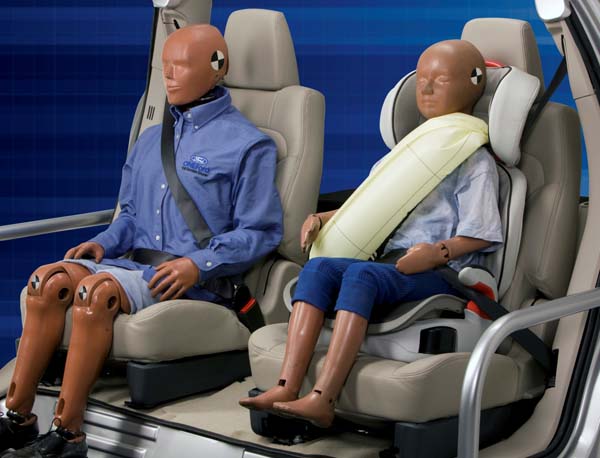 Ford’s inflatable rear seatbelt is designed to reduce head, neck and chest injuries for rear-seat passengers, often children and older passengers who can be more vulnerable to such injuries. In the event of an accident, the belt rapidly expands to disperse crash forces across a body area five times greater than that achieved by a conventional seatbelt.

“We’ve tested the system extensively using our entire crash test dummy family and it offers extra protection over the standard rear seatbelt system,” said Joerg Doering, core engineering seatbelts engineer, Ford of Europe. “Bringing together the attributes of an airbag and a seatbelt is a significant development. This technology isn’t currently available in Europe.”

In everyday use, the inflatable belts operate like conventional seatbelts and are safe and compatible with infant and children safety car and booster seats. In Ford’s research, more than 90 percent of those who tested the inflatable seatbelts found them to be similar to or more comfortable than a conventional belt because they feel padded and softer.

The technology was first offered on the 2011 Ford Explorer in the U.S. and proved immediately popular, with 40 percent of buyers choosing the option.

“It provides extra support to the head and neck and so is especially effective when worn by young children or the elderly occupants who are more vulnerable in accidents,” Doering said.

“The new Mondeo will be the first vehicle in its class to offer this technology,” said Mark Beal, marketing manager, Ford of Europe. “We’re confident it will really appeal to customers.”

Ford’s inflatable rear seatbelt technology is the latest in a line of Ford seatbelt innovations dating back to 1955 when customers were offered factory-fitted front seat lap belts for the first time.