The Ford Transit Custom has been voted Continental Irish Van of the Year 2013 by the Irish Motoring Writers Association (IMWA).

The announcement was made today at an awards ceremony at the Convention Centre Dublin attended by leading figures from the motor industry.  The Transit Custom, with 69 points, finished ahead of the Citroen Berlingo Airstream on 49 points and the Peugeot Partner Euro 5 (44 points).

Members of the Irish Motoring Writers Association van jury cast their votes on the basis of   value-for-money, reliability, versatility and lasting residual value, among other attributes.

Presenting the award to Ciaran McMahon of Ford Ireland, Paddy Murphy of award sponsors Continental Tyres Ireland commented: “We witness great progress being made in commercial vehicles each year, not least in terms of fuel economy and driver technology, and Ford’s Transit Custom is a case in point. These and other strengths make it a worthy bearer of the title Continental Irish Van of the Year 2013.” 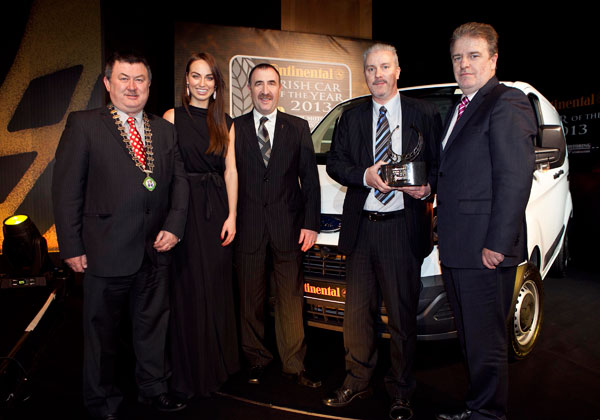 At the same ceremony the BMW 3 Series was voted Continental Irish Car of the Year 2013.