The feature called Door Edge Protector will be available on Ford Focus models in Ireland, with its debut as an option on the new Ford Focus ST which arrives in Ireland in September.

The system – designed by Ford engineers in Cologne, Germany – works automatically when the door is opened. A protective flap concealed in the door moves into position in a fraction of a second as the door opens providing a buffer that prevents damage to paint and body work.

“The Door Edge Protector will be one of those features that we think will make customers say ‘Why didn’t someone think of this sooner?’” said Matthias Tensing, product development system engineer. “It will be a relief to parents with children in the backseat or anyone who needs to park in a tight spot.”

Seventy-two per cent of car-owning households across France, Germany, Italy, Spain and the UK have damage to their vehicle doors, Ford research shows. The cost to repair a dented car door can easily reach €300.

Car owners in Spain are the most likely to suffer damage to their car doors, Ford research suggests, with 83 per cent reporting scuffs. And even though car-owning families in the UK are statistically the most careful, 53 per cent confess to having scratched or dented their car doors. 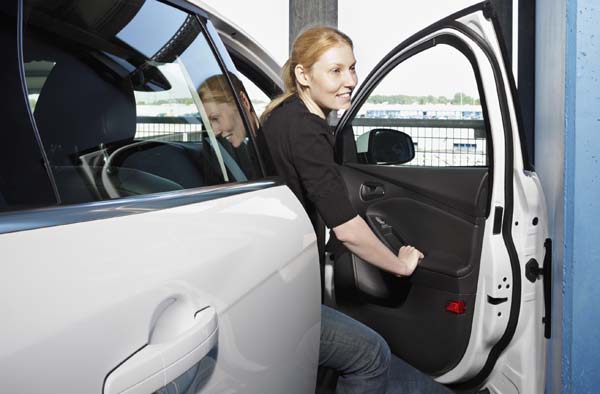 Ford’s Door Edge Protector offers a defence against damage for these car owners by fully extending into its protective position at a door opening gap of less than 150mm. The feature defends against more than 90 per cent of variously positioned obstructions to the front doors and 85 per cent at the rear doors.

Offering maximum protection with minimal impact on weight and without affecting existing mechanisms or side impact performance, the Door Edge Protector retracts in just 60 milliseconds to allow for doors being slammed shut and includes a clutch mechanism that prevents damage if the flap is obstructed when returning. A special rubber compound is used that can withstand thousands of usage cycles and creates a minimum of noise as it springs into position. The protective flap is quickly and easily removed by heavy users, with a replacement unit simply clipping into place.

“The small scuffs and scratches that result from car doors being opened into obstacles, or from having a car door opened into your own vehicle, can be frustrating for car owners – often too small to be covered by insurance but expensive to have repaired out of car owners’ own pockets,” said Matthew Avery, crash and safety research manager at Thatcham, the UK Motor Insurance Repair Research Centre.

“Ford’s new Door Edge Protector is an excellent innovation for preventing these annoying dents and scratches. Any system that can reduce the risk of damage to your own or someone else’s vehicle is worthy of recognition, but one that operates so effectively without affecting the looks or performance is particularly noteworthy.”