In March 2013, one of Northern Ireland’s leading Motor Factors, Fyfes opened a sister company, Fyfes Car Parts Ireland in Donore Industrial Estate, Drogheda, Co. Louth. It has been onwards and upwards for the branch ever since. 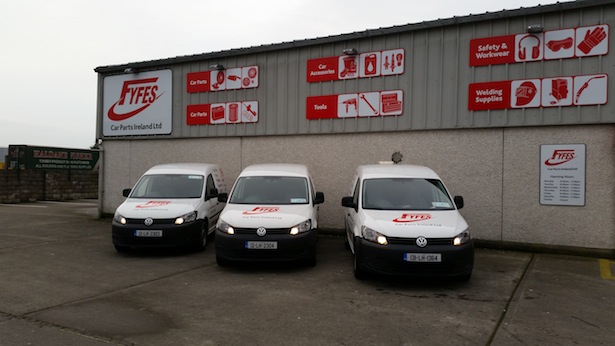 Due to its success, a second branch opened its doors in Dundalk, Co. Louth at the beginning of June 2014. Situated on the Coes Road, this branch stocks the same extensive range of car parts and engineering supplies that customers have come to know from Fyfes in Drogheda

Since opening, Fyfes Drogheda has continued to bring new levels of service, range and availability to the area. The Fyfes fleet is a common sight on the roads in Drogheda, Dundalk and the surrounding areas.

With the he opening of the Dundalk branch, a decision was made to add to the fleet which, further improved the overall levels of customer service in the region

Now with two branches in the Republic, Fyfes Car Parts Ireland has access to a comprehensive stock portfolio. Additionally both branches can draw on the huge stocks available from the parent Company in Northern Ireland.

Employing local staff with extensive experience in the local area and backed up by the parent company, Fyfes Car Parts Ireland has the knowledge and expertise to ensure customers are offered a better service. Manager of both branches, Aidan Donnan has been with Fyfes since 2005 and has 23 years experience in the motor trade.