Grange Motors from Mullingar, Co. Westmeath was recognised for their exceptional performance in customer satisfaction in both Sales and After Sales areas. The award was presented to the winner Mr Paul Coleman, Dealer Principal of Grange Motors by Didier Leroy, President and CEO of Toyota Motor Europe (TME).

Approximately 2,600 European retailers were evaluated on their results during a continuous performance assessment, which is an inherent and important part of the company’s standards. Based on a very demanding set of selection criteria, 42 retailers achieved Customer Satisfaction distinctions. 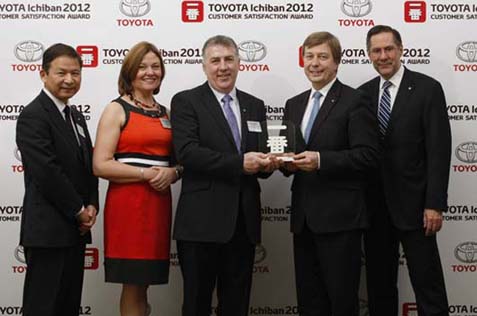 Speaking at the awards ceremony, Didier Leroy, President and CEO of TME said, “We need to exceed customer expectations through our products and at every point of customer contact. It is the customer’s choice to purchase a Toyota and we want to make sure that they remain happy with that decision!”

Mr David Shannon, Managing Director of Toyota Ireland added: “I wish to add my own congratulations to Grange Motors on winning the Ichiban award. They epitomize Toyota Ireland’s aim and that of our Dealer Network to always put customer satisfaction at the centre of everything we do”.

‘Ichiban’ is the Japanese word borrowed from ‘Okyajusama Ichiban’ which means ‘Customer First’, with ‘Ichiban’ meaning ‘first’ or ‘number one’. Since the beginning of the TME’s annual Ichiban Awards in 2007, Customer Satisfaction performance of the Toyota retailers has improved by some 24% points in Sales and 17% points in After Sales.