The increasing role played by the internet in maintaining up-to-the-minute information on product, product pricing, traceability and the agencies involved in vehicle assessment and repair methods was underlined at a meeting in Dublin recently, writes Declan O’Byrne. 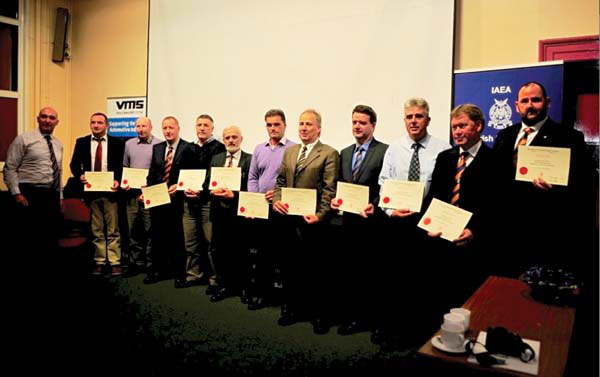 Addressing the Institute of Automotive Engineer Assessors, John Jeffrey, of GlassMatix, demonstrated the extended functionality and latest additions to the dedicated hi-tech services provided by the company, in association with Thatcham and eScribe, experts in safety, security and crash repair.

Next month GlassMatix will be issuing a “service pack update” which, for the first time, he said, would apply to Light Commercial Vehicles and be accompanied by guidelines on creating a ‘methods pack’. With the appropriate links from GlassMatix to both Thatcham and eScribe and based on submitted ‘repair line’ estimates, this pack could then be printed out by an engineer for each job. Further information, he added, could be, obtained from GlassMatix.

Mr Jeffrey was accompanied at the meeting by David Punter, of GlassMatix’s Bodyshop and Insurance Division.

“The valuation produced reflects a value which is considered to be a fair market valuation to allow the insured to purchase a similar vehicle whilst being sensitive to the insurer’s need to ensure vehicles are not being overvalued,” he added.

Mr Kavanagh said VMS systems were rigorously tested “on a daily basis” and each valuation report was confidential and provided “a full audit trail disclosing the exact number of vehicles used in generating a valuation, a link to each of the vehicles used and a full breakdown on each calculation”. A new VMS mobile phone App is now available.

IAEA chairman Darren Power said that changes in the examination system, practical and written, along with the IAEA website, were imminent “to bring them into line with Irish requirements” and these would be announced in detail at a later date. The next exams are being provisionally scheduled for December. Plans we also being put in place, he said, for a series of lectures and workshops including a number with participation from Volvo in November, in December, Autoglass (Belgron), Dow, TRL and the Road Safety Authority and Jan/Feb the Irish Tyre Industry Association.

A schedule of planned meetings will be issued shortly and any suggestions from candidates for specific lectures will be welcome.

Frank O’Neill, of the Dublin Institute of Technology (DIT), Bolton Street, said candidates who sat and passed the IAEA exams were “70 per cent along the road to getting a degree”. Standards were not dropping, they were being maintained, he said. But he warned that the practical exam in particular was “a very hard exam to pass”.

The meeting co-incided with the presentation by IAEA Regional Delegate, Brian Ross of 12 certificates to candidates who successfully passed the Institute’s written and practical examinations. Mr Ross paid tribute to the successful candidates and to Declan Allen and Frank O’Neill, of DIT Bolton Street for their close co-operation with and encouragement of the Institute’s educational activities.