Delegates praised the fourth IBIS Ireland as a huge success, as speakers tackled a wide range of subjects tied together by the theme of Securing the Future.

The International Bodyshop Industry Symposium returned to Ireland on May 2 at Castleknock Hotel, Dublin. It brought together influential thought-leaders from Irish and British businesses. The theme for the day: Securing the Future. A powerful speaker line-up included representatives from Ford, Audatex, Betag, the LSE, Auto-Motivate and the insurance industry plus IAEA coverage, ensuring delegates had comprehensive and robust information about the latest trends and issues affecting crash repair in Ireland as well as across the globe.

Delegates arrived from 8am and took the opportunity to break the ice, get to know one another and start networking. The conference began at 9am and Jason Mosely, CEO of IBIS, welcomed delegates to this year’s IBIS Ireland and thanked our partners, Axalta and Audatex, before handing over to the conference moderator, Robert Snook.

Robert was very much a scene-setter for the conference, and he walked delegates through the three pillars of IBIS: safety, skills and standards. His prognosis that ‘It’s less exhausting to stay ahead than keep up’ inspired confidence among delegates. And while the pace of changes coming towards the bodyshop industry is high, speakers across the conference universally welcomed the challenges and changes they will create in ensuring an industry fit for purpose.

The first speaker of the day was Ford Europe’s Jim Azzouz, who spoke with clarity about Ford’s place in today’s aftermarket. Everything, he said, starts with the customer; a successful sale creates an obligation to the buyer, and it’s Ford’s obligation to deliver on their brand experience. Ford sees working hand-in-hand with the crash repair industry as of significant strategic importance and explained the growing need for a much more ‘open door’ policy with collision repairers.

Ryan Davison of Audatex led the second session. He explored how disruption posed by technology will impact the industry. Customers expect technology to make their lives more convenient; they want information at speed, choice and immediacy. Ryan painted the picture of bodyshops with AR glasses, robotic assistants, 3D printers and more. He delved into the example of an AI generating a list of probable parts needed before a vehicle has even arrived on site as one way to speed up the repair process. But as machines are only as effective as the data that feeds them, he believes data will be the new ‘oil’ in the industry.

Following a short coffee break, which gave delegates a further chance to network, the conference resumed with Steve Young of ICDP. Through the lens of data, he examined the big trends affecting the global market and Ireland’s place in it. Technology is fuelling a declining trend in the volume of crashes, whilst complexity in repairing cars is increasing. Steve predicted that by 2030 this will lead to a ‘perfect storm’ that poses an existential risk to smaller bodyshops who will struggle to continue to run broad businesses.

Ralph Meichtry, CEO of Betag Innovation, focussed on the importance of quality training in the industry. Good training, he said, means faster and safer repairs, and allows staff to deliver on putting the customer first. He explored the implicit trade-off between quality and speed, and how repair shops require both. He revealed how Betag’s training programs allow bodyshops to invest in their staff and so deliver the best possible customer experience, leading to crucial customer endorsements.

The fifth speaker of the day was Mike Monaghan of Auto-Motivate, who brought incredible energy to the stage. Mike had one central message for delegates to take home: the importance of people. The best premises and equipment in the world mean nothing if the staff aren’t motivated. But ‘an inspired workforce is unstoppable.’ He spoke of how not enough bodyshops train their staff in non-technical soft skills, such as behavioural mindset development, which ultimately holds them back.

Following the networking lunch, Professor Michael Cox of the LSE stepped onto the stage to talk Brexit. He explored the socio-political circumstances in Britain that led to the Leave result in 2016 and what the future implications might be for Ireland. However, when asked to predict the outcome of the ongoing Brexit negotiations, he made the controversial claim that in the end Brexit will be cancelled. 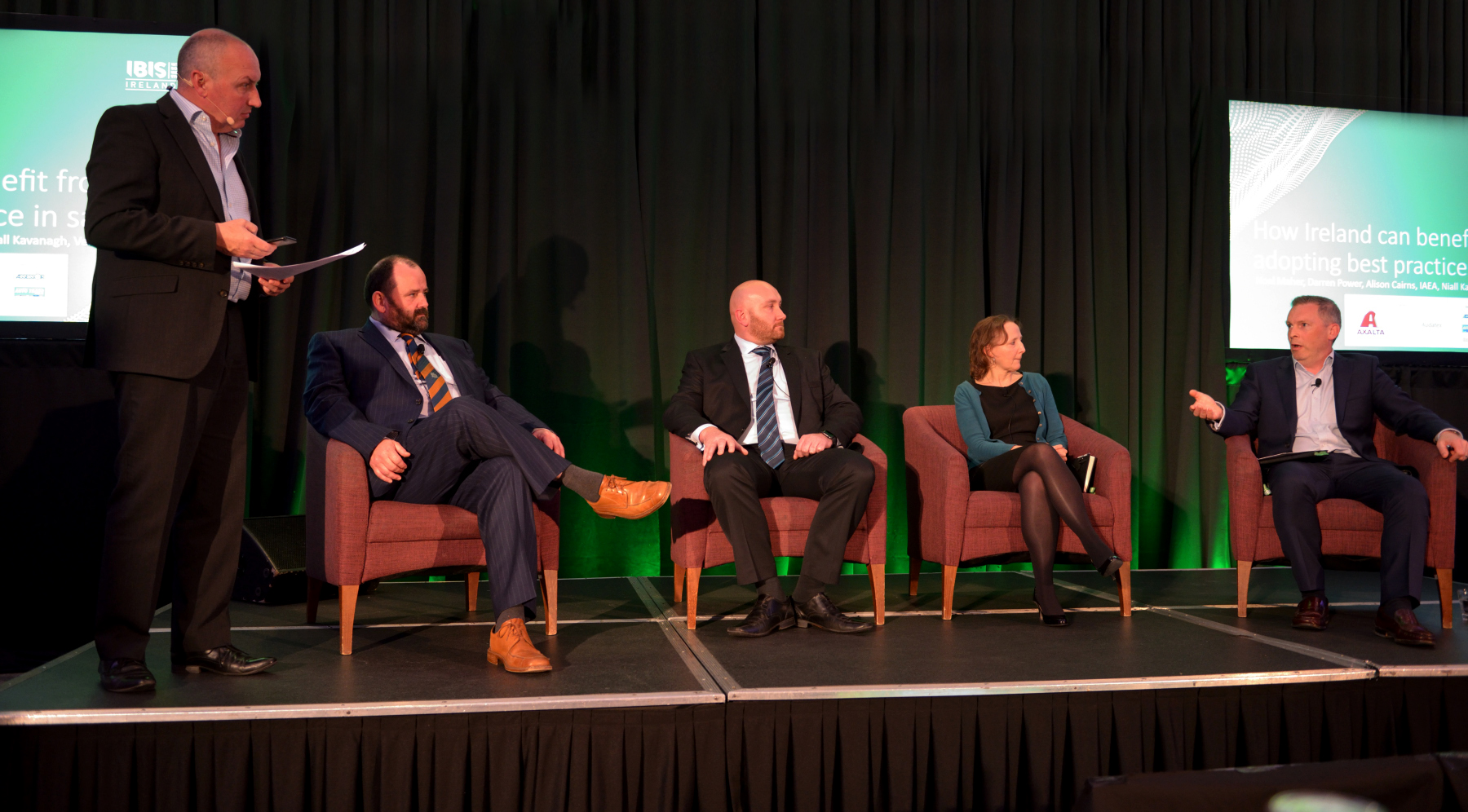 Next, a panel session moderated by Robert Snook and featuring Alison Cairns, Noel Maher and Darren Power of the IAEA, and Niall Kavanagh of Verisk. They explored the importance of a new salvage code for Ireland, as the current one is outdated and not fit for purpose, and what barriers needed to be overcome in order to implement change.

The final speaker of the day was Paul Hanna. As deputy director of criminal enforcement for the CCPC, he’d come to IBIS Ireland to talk about rogue traders. With his police background, Paul had seen first-hand the consequences of unsafe vehicles. Paul walked the audience through the enforcement actions the CCPC can conduct but emphasised that enforcement was not enough – the CCPC needed to connect with the industry, hence his presence at IBIS Ireland this year.

IBIS Ireland 2019 closed with some final thoughts from Robert Snook, before delegates continued their networking over a BBQ and drinks. The event was hailed as a success by the attendees, and IBIS will return to Ireland again for 2020 to continue to build on its central message of safety, skills and standards in the collision repair industry.