As part of a fundraising effort in conjunction with Roscommon-based charity ‘Join Our Boys’, local Volkswagen dealer, J Keane & Sons kindly sponsored the top prize of a brand new Volkswagen Up! in a Raffle that saw tickets sold throughout the country. 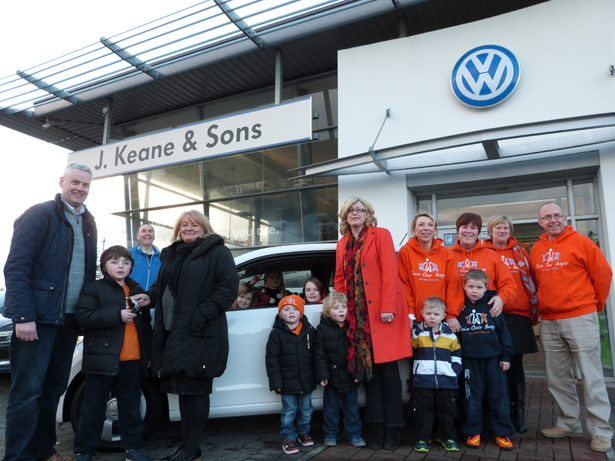 The idea for the raffle came about as a result of three very special boys, Archie, George and Isaac Naughton, who in 2012, were all diagnosed with a fatal neuromuscular disease, Duchenne’s Muscular Dystrophy (DMD). The funds raised for the charity were in excess of €96,000

DMD affects 1 in every 3,500 boys and each year 20,000 children worldwide are born with the disease, 99 per cent of these are boys. The human body is created based on essential genetic instructions from DNA, which is the genetic basis for nearly all life on the planet. Duchenne is caused by faults in the gene found on the X chromosome. These faults are called genetic mutations.

The dystrophin gene is responsible for producing a protein called dystrophin in muscle cells that appears to act as an anchor to help keep the cell walls intact. Due to its large size it is particularly prone to mutations. It is the break up and death of muscle cells through a lack of, or poor functional dystrophin that causes the severe muscle wasting in DMD. This leads to premature death.

Pictured receiving the keys to her brand new Volkswagen Up! is Deirdre Mears, Osbertown, Naas, Co. Kildare. Also pictured are John Keane, Dealer Principal, Archie, George & Isaac Naughton, the brave ambassadors for the charity, along with their mother Paula and other members of the Join Our Boys team.