J.J. Burke Car Sales in Ballinrobe, Co. Mayo has joined the Renault dealer network. Based on the Claremorris Road, the well-known car dealer has been in the business for over 39 years.

Renault Ireland’s latest dealership will retail passenger and commercial vehicles and facilitate Renault After Sales and Servicing, and will service Western counties and further afield. 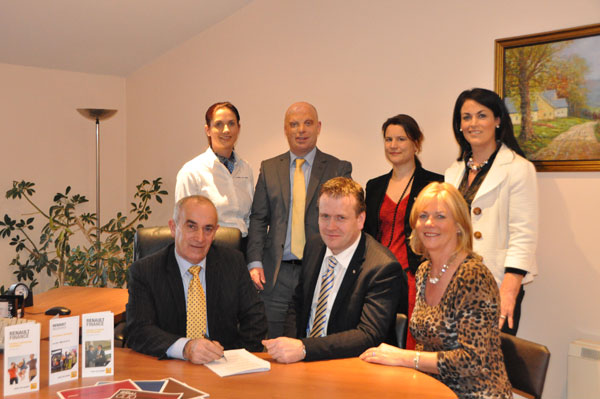 This is the second new Renault dealer announced as part of the company’s recruitment drive, in the past few months, with Michael Grant Renault in Dublin, which opened in November 2012.

Eight new jobs will be created at the new Renault dealership at J.J. Burke’s and a new Renault temporary showroom will be located on the existing site, with construction of a new showroom commencing later in the year.

J.J. Burke Renault will have the entire range of Renault models, including the new Clio, new Fluence and new Megane on sale as well as Europe’s no. 1 best-selling LCV range of Kangoo, Trafic and Master vans.

J.J. Burke Renault will have a fully equipped workshop to carry out service, & warranty, and a one-stop shop for tyres & accessories. The Bodyshop will be equipped to carry out repairs to manufacturers’ specifications with all insurance repairs carried out also.

Duncan Minto, Managing Director, Renault Ireland commented: “With almost 40 years’ experience in the car business J.J. Burke is a great addition to the Renault Dealer Network. J.J. and his wife Helena run a highly customer-focused business and with their family, son Joseph and daughters Karen and Pauline, will offer Renault customers the very best in Renault service in the West of Ireland”.

J.J .Burke, Dealer Principal commented: “We’re delighted to become a partner of Renault Ireland and becoming a part of the wider Renault family. We pride ourselves on being a tightly knit family run dealership where the customer is put first in every aspect of the business. We are also proud to be creating employment in the motor industry, with 8 new jobs to be filled over the next few months.”