Original equipment (OE) manufacturer and system supplier, Hella once again demonstrates its lighting competence, this time through a range of retrofit LED rear combination lamps for DAF and MAN applications. 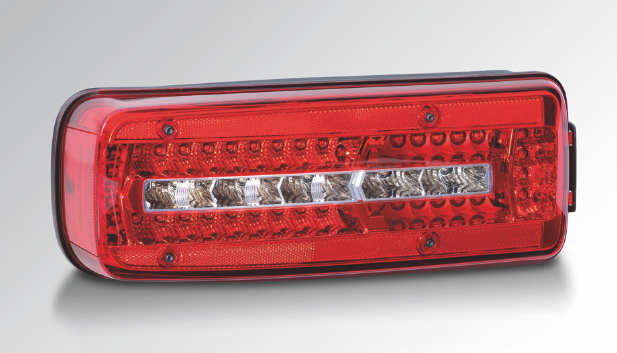 Not only does this replacement solution from Hella address the environmental deficit that fleets operating older vehicles consequently experience, but it allows them to modernise the look of their fleet in a practical and straight forward manner, as these units also provide a direct replacement in terms of their fitting and wiring points.

Additional benefits include their construction such as, for the first time on a full-LED lamp, the outer non-patterned lens is no longer fixed and glued to the housing. This means that it is no longer necessary to replace the entire lamp in the event of minor mechanical damage to the lens, which in turn leads to a considerable saving in costs. In the event of damage, the lens assembly (including seal and screws) can be ordered and replaced. Another plus is the fact that both left and right lenses are identical, thus further reducing costs when it comes to stockholding.

The combinations units also have an innovative appearance, thanks to a dynamic direction indicator incorporated into their design. The dynamic flasher, first applied to series production on premium-class passenger cars in 2013, no longer performs the flasher function using a surface area indicator, but rather with a running light function that appears to ‘sweep’ across the unit.

Alongside its overall contemporary design, the new look flasher underlines the modern and stylish appearance of the lamp in conjunction with its glowing body optics. The striking, modern full-LED rear combination lamp therefore provides vehicles with an unmistakable signature when driving by day or by night.

Despite their modular design, there are variants should operators require additional features, such as a back-up alarm, alternative spacing of the mounting screws or with licence plate illumination.

Emphasising the reliability afforded by LED technology, each element features multi-LEDs, for instance the tail light incorporates 12, the stop light 18 and the fog light eight, whereas the direction indicator and the side marker light are six and five respectively.

“The 2VD/2VP 012 381 rear combination lamp provides the ideal replacement/upgrade solution for all MAN TGX, TGM and TGL model series as of January 2014,” Steve Hudson, Hella’s head of business development explained.
“When it comes to DAF applications, they are suitable for all Euro 5 vehicles with DIN connector from CW33/2009 to CW12/2012 and Euro 6 vehicles from CW13/2012, although a software update will be required.”

For more information about the OE quality products available from Hella, please call customer services on: 01295 662400 or email Hella.sales@Hella.com