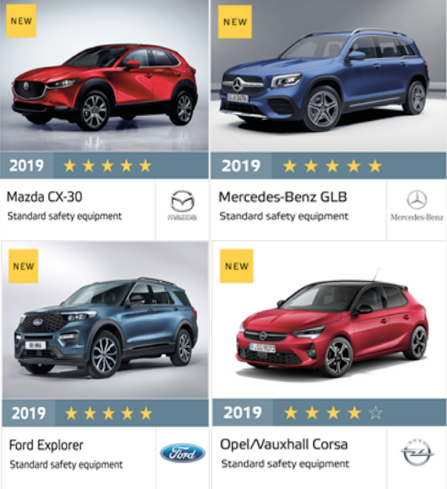 The best performer of this round according to the results is the Mazda CX-30 which achieved a near-perfect 99 per cent score for Adult Occupant Protection. The car, which shares much of its DNA with the all-new Mazda 3 tested earlier this year, now tops the list for this part of the assessment against Euro NCAP’s 2018/2019 protocols.

The Mercedes-Benz GLB becomes the sixth Mercedes-Benz to be rated this year, and the sixth to achieve the maximum safety rating. Ford’s seven-seat Explorer also gets a top rating. The latest version of this large off-roader, which has been on sale in the US in various forms for nearly three decades, comes to Europe in plug-in hybrid form and performs well in Euro NCAP’s tests.

The supermini segment has increasingly come under pressure in recent years from increasing environmental and safety requirements and a change in consumer appetite. Opel/Vauxhall’s new Corsa, however, achieves four stars, just like the previous generation car did against the requirements in 2014. Now part of the PSA-FCA group, the Corsa shares much of its underpinnings with the latest Peugeot 208, which was also rated as four stars earlier this year. Performing above the five-star requirements in three of Euro NCAP’s four areas of assessment, the Corsa only missed the top rating by a single percentage point in Safety Assist.

Michiel van Ratingen, secretary general of Euro NCAP commented: “Congratulations to Mazda for another almost-perfect score in adult occupant safety. There are still several cars to be rated in 2019 but it is unlikely we will see better for this part of the assessment. And congratulations to Ford and Mercedes-Benz for their five-star ratings, too.  Euro NCAP is now gearing up for new tests in 2020 but we’re confident that manufacturers will continue to deliver the highest levels of safety to their customers.”