There are a number of reasons why brakes make a noise, however, the problem does not always arise from the brake pads themselves. Global leader in brake technology, Mintex, discusses the most common reasons:. 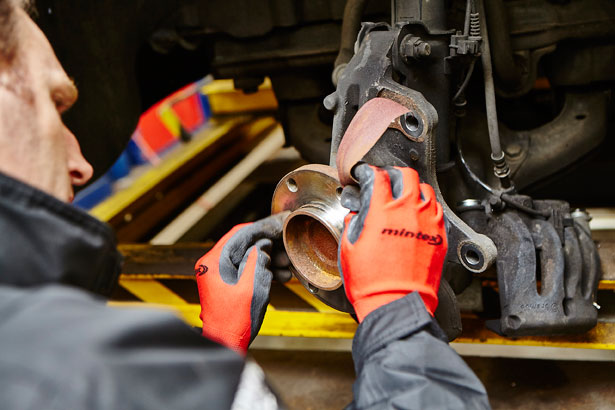 New pads fitted with old discs
Probably the most common cause of complaint has nothing to do with the new pads that have been fitted, but in many cases the pads are returned.

Using old discs that are badly worn or ‘lipped’ can cause problems for the new pads when bedding in. To overcome such situations, always choose to fit replacement discs if the old ones appear suspect. Better to do the job once than have customers returning just to get remedial work done.

Sticking caliper
The next most common complaint of noise is where a caliper is not functioning correctly and usually is not allowing the pads to move freely, both onto and off the brake disc. The piston seal does not rollback and allow the pad to back off the disc. Keeping the pads running even lightly against the disc makes them extremely hot causing a glazing of the pad surface. Eventually this will result in the pads wearing down to the back-plate – then listen to the noise!

Time taken to clean and remove the rust and debris that builds up in the caliper, along with a selective application of non metallic lubricant, such as Mintex CeraTec, will minimise the chances of the caliper malfunctioning before the next pad change.

Incorrect bedding in procedure
New pads generally perform better if a ‘gentle’ approach to braking takes place for the first 200 miles or so. Heavy and high speed applications can cause the volatile resins present in all pad materials to burn, leaving a hard glazed surface that not only gives rise to noise but will seriously affect performance.

Wrong pads used
This is more common on the pads that are asymmetrical and used predominantly on French applications, but it can also be a problem on the Toyota RAV4 where ‘handed’ pads are needed. Generally vibration and squeals will result as the pad does not move as designed in the caliper and the braking performance can be seriously impaired.

Pad design
Some pad shapes, or designs, can be more prone to noise in operation. Some pads have a tendency to flex very slightly, with a single piston pushing into the centre of the backplate whilst the sides are “held” in the caliper. This can result in hairline cracks beginning to appear on the friction material or around the edge of the material and backplate. Vibrations within the braking system cause noise, and can be reduced by the addition of rubber or metal dampening shims.