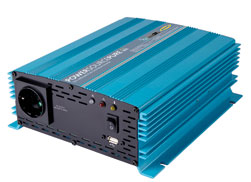 New from Ring Automotive is a range of Pure Sine Wave inverters called PowerSource Pure.
The PowerSource Pure inverters enable almost any electrical item to be run where there is no mains power on site by replicating the normal 230 volt mains supply.

Being pure sine, the PowerSource Pure is compatible with electrical products with inductive loads, such as electrical motors in power tools and capacitive loads such a fluorescent lights or battery charging units for cordless power drills. Compatibility with a whole host of electrical products means the PowerSource Pure is ideal for mobile / breakdown mechanics, motorway maintenance vehicles and industrial service vehicles.

“You can run virtually any appliance designed to work with the normal 230v supply, so compatibility problems are no longer an issue.” says Paul Shaw Ring Automotive Product Manager.

PowerSource Pure inverters are designed to provide power at the rated maximum wattage continuously. This prevents interruptions and removes any doubts about which inverter is needed for the task at hand. They can also briefly provide up to twice their rated output to help power appliance with a high start-up surge.

The 1000w and 2000w versions have the option of with an integrated RCD. This replaces the need for an external RCD and will switch off the inverter if a fault is detected between the live and earth. This protects the user against electric shock from faulty appliances or touching live parts.
These two RCD models also allow for mains outlets to be hard wired directly to the inverter via glands providing a more integrated solution