In the latest set of Euro NCAP results, the BMW 3 Series, Hyundai i30, Mazda CX-5 and Peugeot 208 have received Euro NCAP’s maximum five star rating. All four vehicles show that car makers are rising to Euro NCAP’s challenging 2012 5 star requirements, especially in the area of pedestrian protection where the thresholds have been significantly increased this year.

The BMW 3 Series in particular achieved a commendable 78% in pedestrian protection, a good result for a compact executive car with no active bonnet. The Peugeot 208 scored 61% for pedestrian protection, only just clearing the 2012 5 star threshold of 60%. The Mazda CX-5 scored 64% and the Hyundai i30 67%. In both side impact tests – the side barrier and the pole test – the Mazda CX-5 scored maximum points, the only car of the latest release to do so. By contrast, the i30 showed weak protection of the chest in the side pole test, although its score for child occupant protection was the highest in this round of tests. 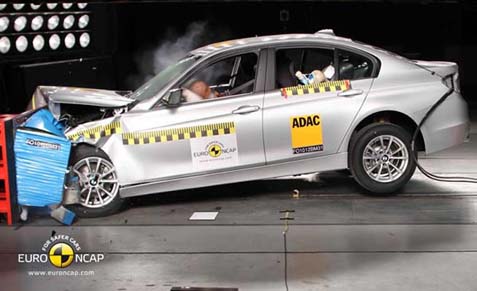 The Mazda CX-5 achieved five stars and, together with the BMW 3 Series, offers an Autonomous Emergency Braking System (AEBs). Such systems act independently of the driver to stop the car, or to reduce its speed, if a collision is imminent. Dr Michiel van Ratingen, Secretary General of Euro NCAP says ‘If all cars were fitted with AEB systems, many crashes could be mitigated or avoided altogether on European roads. The Mazda CX-5, which has AEB fitted largely as standard equipment in Europe, is therefore a good example for other manufacturers to follow as Euro NCAP intends to assess AEB in future testing procedures.’

At its 15th anniversary on 13 June, Euro NCAP will reveal and demonstrate the next phase of its safety programme looking to the future of technologies such as AEB to drive even more safety assistance for European consumers.

Furthermore, Audi has received the coveted Euro NCAP Advanced reward for its ‘Pre Sense front plus’ technology, the second such reward given to the German car maker. The Audi pre sense front plus technology is available on the Audi A6, which achieved 5 stars in 2011. With two long range radars positioned at the front of the car, Audi pre sense front plus is designed to help avoid or mitigate accidents into the rear of cars ahead. The system, available as an option throughout the European Union, can detect vehicles ahead which the car is likely to hit unless action is taken by the driver. Through Euro NCAP advanced, the organization continues to raise consumers’ awareness on systems which offer a significant safety benefit.