It appears that old is new again in the automotive industry.

Here in Ireland, the average age of the passenger car fleet is 8.4 years and 8.8 years for LCVs, according to the ACEA.

Jamie Willis, technical support supervisor at Autodata, a subsidiary of Soleram said: “The Covid outbreak is seen as a more recent protagonist for this latest trend, as drivers opt to hold on to their cars for longer.

“But that’s not the only reason. Some drivers still think switching to an electric vehicle is their next move; however, many are nervous due to the technology and cost, and simply want to continue in their current vehicle until the time is right for them to change.”

According to Willis, there is also a longer-term trend. “As vehicles have become more reliable, better built, and able to handle the higher mileage needs that age throws at them, drivers have increasingly been keeping vehicles, with many turning into collectors’ items.”

As drivers hold onto their vehicles for longer, the onus on the aftermarket is likely to increase. Technicians will be progressively called upon to service older vehicles with a wider range of issues. 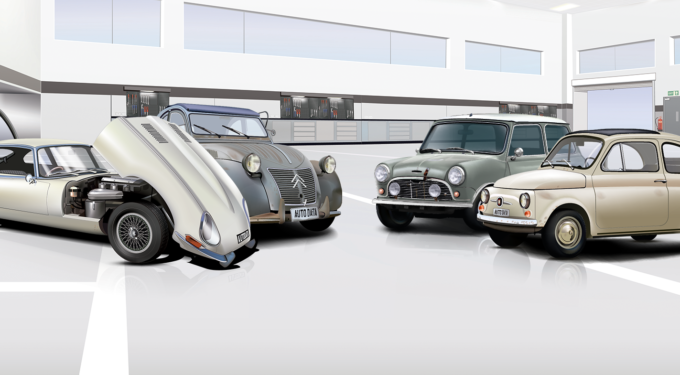 Autodata has used its enterprise online workshop application to find out which pre-2000 classics, modern classics, and “old reliable” vehicles were serviced the most from July 1, 2020 to June 30, 2021.

The oldest vehicle technicians used Autodata to service in the past 12 months was a classic, the 1959 Austin Mini/Morris Mini-Minor.

The original Mini was produced by the British Motor Corporation (BMC) and manufactured at Longbridge in England and later in Australia, Belgium, Italy, Malta, Portugal, Spain, South Africa, Yugoslavia, and Latin America.

Common issues seen in this car include corrosion, a rear suspension that needs realignment, body damage from aftermarket wheels that are too wide, and sparks emitting from an improperly secured boot-mounted battery.

The 1960s vehicle most serviced by Autodata workshops was the MG MGB. The 1967 version of the MGB introduced a variety of new safety features, including a collapsible steering column, side marker lights, and anti-burst locks. Rust is the most common problem with this car, according to Autodata.

The 1970 Citroen 2CV-6 was the most frequently seen 70s car in workshops. This vehicle saw the addition of rear lights from the Citroen Ami and was the last model to feature the single front bench seat.

The oldest LCV for which Autodata data was used in the past 12 months was also from this decade: the Late Bay Volkswagen Transporter T2. Nicknamed the Breadloaf, the distinctive Type 2 was initially built around the same 1100 engine as the Volkswagen Beetle and only later upgraded to the 1200 model.

Meanwhile the first-generation Mazda MX-5 was the most-serviced 1980s car, and the 1982 Volkswagen Transporter T3 was the most frequently seen 1980s LCV.

The pre-1983 T3 was air-cooled and featured the distinctive round headlights of earlier Transporters. It was also the final generation of rear-engined Volkswagens.

Volkswagen’s Transporter T4 was by a significant distance the most-serviced pre-2000 vehicle in workshops, with nearly 14,000 requests for data in the past 12 months.

“We’re delighted to see so many classics and modern classics being serviced in workshops with our data,” said Autodata managing director, Chris Wright.

“With electric and hybrid legislative deadlines on the horizon we anticipate consumers will hang on to older vehicles for longer than ever.”