Six jobs will be created in North County Dublin by 2014 with the opening of a new SEAT dealership at Michael Barrable Motors Limited, Airside Swords.

The opening of the SEAT business took place on Thursday 29thOctober where Simon Elliott, Group CEO of Volkswagen Group Ireland and President of Fingal Chamber President Siobhan Moore addressed the assembled crowd which included Dublin GAA star and Barrables Brand Ambassador Ger Brennan who was presented with the keys of his new SEAT Toledo. TV3 and SEAT Brand Ambassadors Anna Daly and Aisling O’Loughlin were also in attendance. 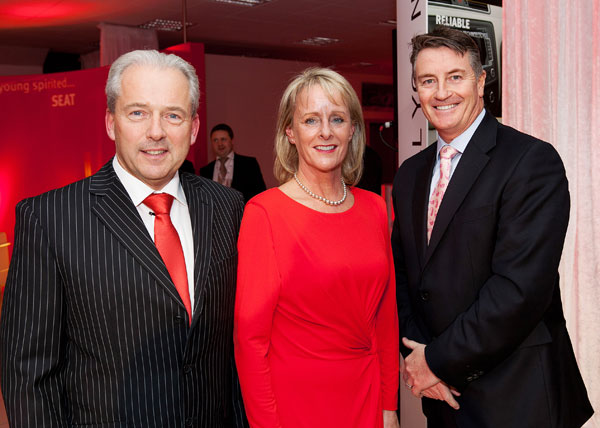 Simon Elliott, CEO of Volkswagen Group Ireland is delighted with the appointment of Barrables as their new dealership. “In a time when there is a lot of doom and gloom around, it is nice to be able to bring some good news to North County Dublin as we expand our SEAT operations in Ireland,” said Elliott. “SEAT is an exciting brand and we are delighted that Michael Barrable and his team will be representing us in this hugely important area.”

“We are committed to the area and the SEAT brand is very important to our plans for the future,” said Michael Barrable. “Within the next two years we will add six new positions to dealership through the addition of SEAT and this is certainly good news for the area.”

SEAT’s new Toledo was launched on the night and this, along with the new Leon model which comes in February 2013 will form the backbone of a new model offensive.

In August SEAT Ireland secured a €20 million investment from parent company SEAT SA. SEAT aims to increase its market share in Ireland to 3.5% by 2015 thanks in part to its new product range and an ambitious dealership restructuring which is already underway. SEAT Ireland intends to grow its network from 22 to 26 by 2015.

SEAT Ireland has aggressive finance and product offerings in the market for 2013, which include 3% APR Finance rates, as well as 3-years Free Servicing and 3-years Warranty. And all customers who order a new SEAT before the 21st of December will receive 3,000km of free fuel.