Standox has developed a VOC-compliant primer surfacer for passenger car repairs which can be applied directly to steel and to aluminium substrates. Standox VOC Nonstop Primer Surfacer U7580 can also be used on most common plastic substrates by adding Standox VOC Plastic Additive U7590. 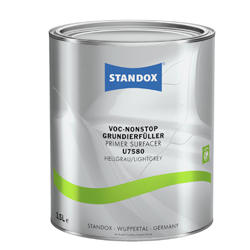 Thanks to the special product qualities of Primer Surfacer U7580, bodyshops can not only cut down on their inventory, but can also eliminate several steps during the refinish process. Pre-treatment with a primer surfacer or adhesion primer, for example, becomes obsolete due to the good adhesion properties and the high film thickness of the VOC-compliant primer surfacer. Not only can it be used on new metal replacement parts as a sanding primer surfacer, but it can also be applied wet-on-wet. This means the basecoat can be applied without sanding after a short flash-off time of 15 to 20 minutes. In this way, the primer surfacer contributes to speeding up repair processes in the workshop.

“Our new VOC Nonstop Primer Surfacer is a true all-rounder and really helps refinishers in their work,” says Anthony Cashel, Marketing Manager for Axalta Coating Systems in the UK and Ireland. “It can be used directly on all substrates without pre-treatment with a primer surfacer or adhesion primer, and it offers such good corrosion protection that even areas which have been sanded right down to bare metal do not need to be pre-treated with a primer. And that’s not all. The VOC Nonstop Primer Surfacer U7580 also offers excellent flow and very good coverage to produce excellent results. It’s a versatile, smart solution for professional bodyshops.”

The Standox VOC Nonstop Primer Surfacer U7580 is available immediately in light grey and black. For further information, please contact your local distributor or visit www.standox.co.uk.