The first New York Motor Show was held for the first time back in 1900, and it was North America’s first ever motor show.  And today, the annual motor show in the big Apple each Easter features the largest public attendance of any show in the US, ensuring that it is worth a visit.

In addition to launches today of interest to us at the Jacob Javits Convention Center in the heart of Manhattan, there are some weird and wonderful creations, like the driveable aeroplane and Morgan 3 Wheeler which were both shown last year.

The highlights of the 2013 New York Auto Show for Irish readers this year include the all-new Range Rover Sport, which was unveiled on the eve of the show with a little help from 007 Daniel Craig.

Then there’s the all-new Kia Soul and face-lifted Optima; the Mercedes CLA 45 AMG; a string of new Volvo R-Design models; the Jaguar XJR and the stunning XKR-S GT; the new Audi A3 Saloon; the new Jeep Cherokee and several more models and concept cars.

The 2013 World Car of the Year awards have also just been announced, and the seventh generation Volkswagen Golf is the winner. See separate story.

The all-new 2014 Range Rover Sport has just officially debuted at the New York Auto Show. In fact it was unveiled to the global press last night.

The new Range Rover Sport is expected to follow the Evoque, which has one so many new customers for the brand, and both are joined by the recently launched bigger Range Rover. The new model Sport brought New York City to a standstill when 007 himself, James Bond aka Daniel Craig, did the launch honours. 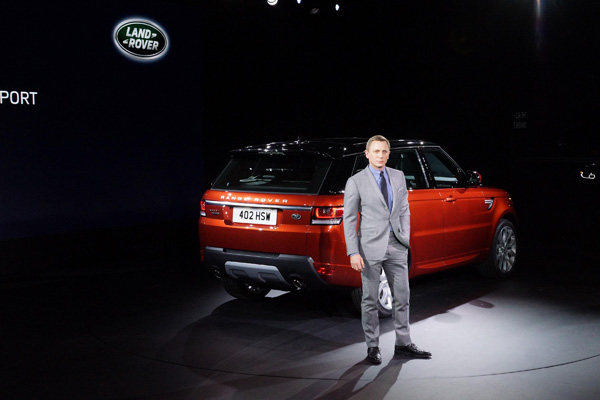 The Range Rover Sport is a dynamic and class looking model shedding its more conservative look. While the new Sport sits on the same lightweight platform as the new Range Rover, it is not a baby brother to the king of SUVs. In fact about 75 per cent of the Sport is all-new and unique. It has an all-aluminium body with the weight saving over the current Sport delivering economy and emissions improvements of up to 15 per cent.

The Range Rover Sport will come with a wide choice of engines, many of which will be similar to those in the bigger Range Rover. Initially when the new Sport arrives in Ireland in September or October, there should be a 288 bhp SD V6 diesel, with the probability of a 255 bhp TD V6 and/or 335 bhp SD V8 diesels, plus a hybrid following during 2014. There will be other petrol and plug-in options too. 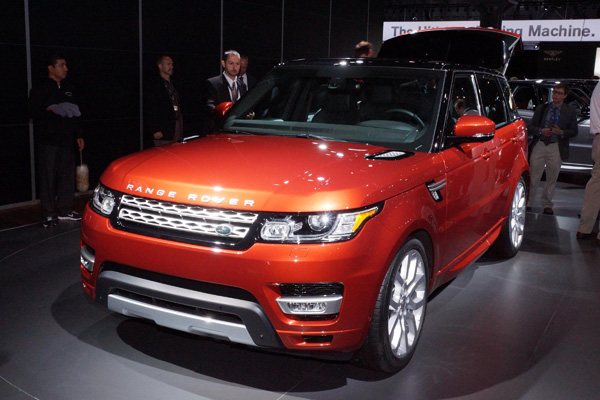 A big change that existing owners will notice straight away is the dropping of the rotary pop-up controller for the eight-speed automatic gearbox, in favout of a new electronic stick control as well as paddles on the steering-wheel.

Another one to be aware of – if you go for the extra seats option,  you will lose the full-size spare wheel to a space saver.

And for the question all existing owners have been asking, we heard a whisper that while prices will be higher than the current model, it will not by that much.

The new Mercedes-Benz CLA 45 AMG has debuted at the New York Motor Show, with the 355 bhp 2.0-litre turbo engine and four-wheel drive.

And even though you get super extra performance, Mercedes-Benz claims it can nearly 41 mpg and  it emits somewhere between 161 and 165g/km of CO2. 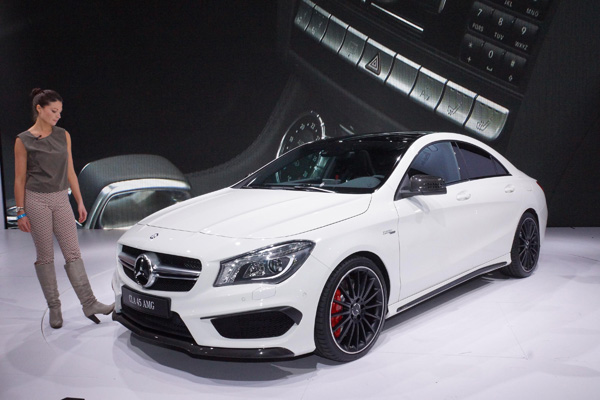 The all-new Kia Soul has just been launched in New York with a new chassis and design. It is no coincidence that New York was chosen for this motor show launch because Americans love the current Soul. This explains the evolutionary rather than evolutionary design and styling. And the interior moved much more upmarket.

The US engine range in New York includes a 128 bhp 1.6-litre petrol engine.  We can expect to see a 126 bhp 1.6-litre diesel in the line-up that will make it to the UK and Ireland early next year.

Kia Optima face-lift
Kia Motors also unveiled a refreshed version of its Optima saloon, a car that has proved a global hit for Kia since its launch exactly three years ago.

The 2014 Optima arrives with updated front and rear ends, retaining the vehicle’s dynamic and sporty proportions. It is set for European markets early in 2014. 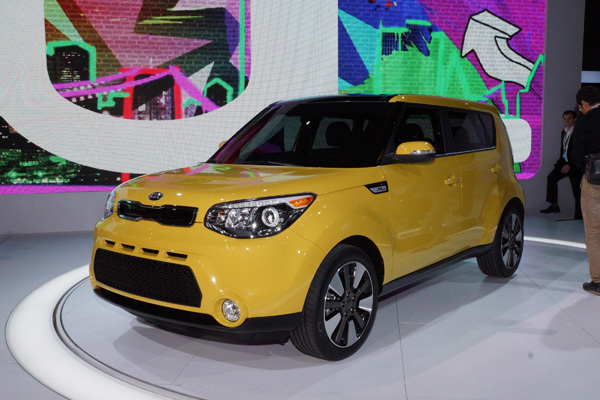 A new high-performance Jaguar XJR has debuted at the New York Show. It is powered by a 542 bhp supercharged 5.0-litre V8 engine. And it is capable of covering 0-62 mph in 4.4 seconds and hitting a limited top speed of 174 mph, the XJR brings supercar performance to the XJ range. The XJR will go on sale this summer. 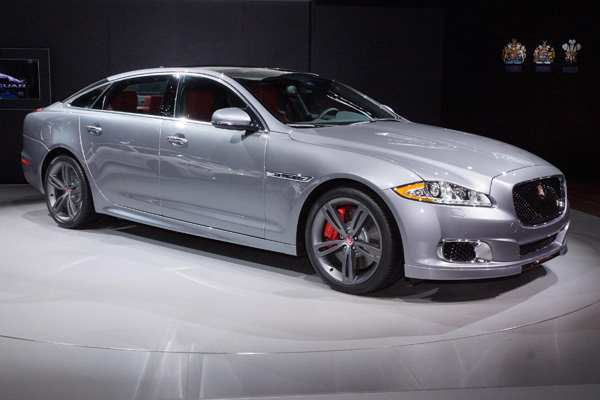 Ian Callum, Jaguar’s Design Director said: “This XJR is the flagship XJ and I’m delighted we’ve got it back into the range. This is a premium luxury supercar that also has an extremely purposeful look to it. This car will surprise, there’s no doubt about it.”

Jaguar also used the occasion to also launch the striking new XKR-S GT, which it promises is the ‘ultimate road-going XK’ 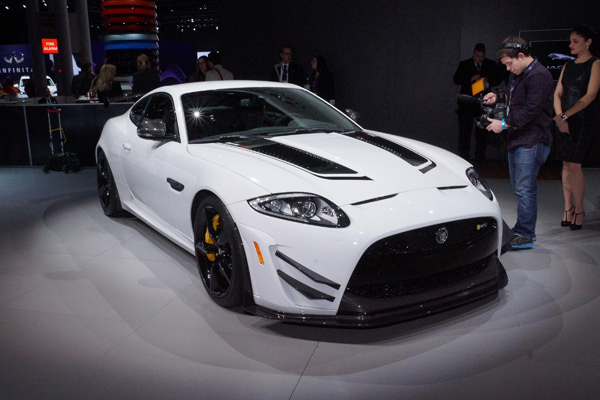 The production plan is currently limited to just 30 cars for the North American market but a right-hand drive hasn’t been ruled out if there is demand.

It is basically the 542 bhp supercharged 5.0-litre V8 engine carried over from the XJR but with a radical new carbon fibre body and other features added.

The Audi A3 Saloon has been unveiled in New York. This car wasn’t supposed to break cover until next month at the Shanghai Motor Show. Expect to see it go on sale in late summer. The word is that it will sell for more  than the A3 Sportback.

The 2014 Jeep Cherokee has made its official debut at the New York Motor Show today. It should go on sale in Ireland in the summer with a 2.0 diesel engine the likely top choice.

Subaru showed a new WRX STi concept at the New York Show but it hasn’t been confirmed that the production version will be launched in the UK and Ireland.

The Cadillac CTS has been officially unveiled at the New York Motor Show. This third-generation CTS is 127 mm longer overall (with a 30mm longer wheelbase), lighter and more spacious than its predecessor, and features a dramatic new styling direction. 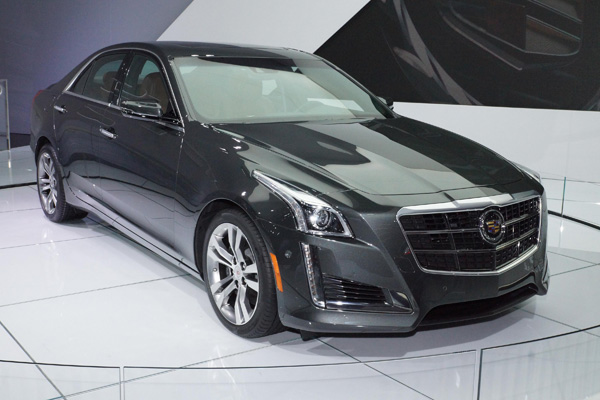 The current Cadillac CTS sells in the U but not in Ireland, but even the UK models are in left-hand drive only. And there is no plans for a right-hand-drive version of the new model.