Just two days after the Olympic flame reached the summit, 22 heroic hikers from PPG Industries, Nexa Autocolor and the industry have surpassed their charity target and have raised nearly £15,000 after completing a charity ascent of Mount Snowdon.

Despite the atrocious conditions all the team members battled through high winds, relentless rain, and poor visibility to reach the summit in confidence that the finish line was ‘just around the corner’. 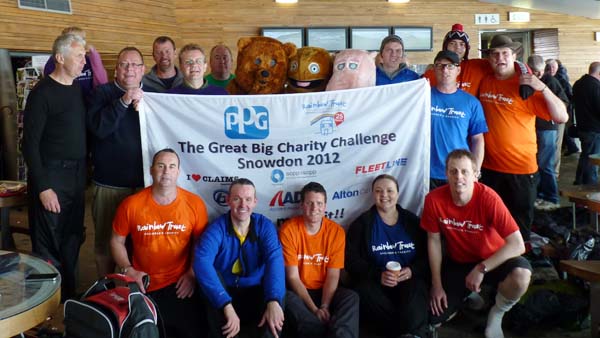 Danni Aiken PPG Industries Marketing Communications Manager comments”We are absolutely delighted with this fantastic result. The team worked incredibly hard to conquer Mount Snowdon for Rainbow Trust Children’s Charity. It is a great achievement to have exceeded our original fundraising target. Our industry colleagues, friends and family have been tremendously supportive in helping us raise vital funding for Rainbow Trust. We would like to thank everyone for their wonderful support”

Nicola O’Donnell Senior Partnerships Manager at Rainbow Trust comments “on behalf of everyone at Rainbow Trust, especially the families we support, I would like to extend our heartfelt thanks to the team for their fantastic achievement in not only undertaking such a huge challenge of climbing Snowdon but in surpassing their fundraising target. There support means we can give over 600 hours of care to families who have a very sick child”

Rainbow Trust Children’s Charity provides emotional and practical support to families who have a child with a life threatening or terminal illness. This year Rainbow Trust celebrates its 25th anniversary.

You can still donate to the cause via the teams Virgin giving page at http://uk.virginmoneygiving.com/team/PPGSnowdon