Euro NCAP has released the first results of rear-end crash avoidance systems tested against the upcoming 2014 rating protocol. Eight vehicles have been compared with respect to their performance on the test track. 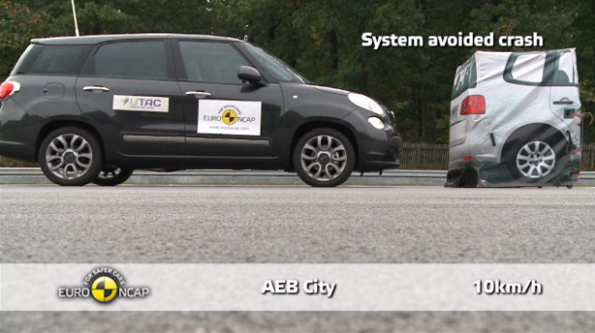 Real world claims data suggest that Autonomous Emergency Braking (AEB) systems can reduce rear-end crashes by one quarter or more and lead to a significant reduction of injuries.

As from January 2014, Euro NCAP will in its rating scheme give credit to vehicle manufacturers that equip their models with robust forward collision warning and/or automatic braking technology.

The technologies available on the market today can be divided into groups based on the type of crash they are designed to mitigate. ‘AEB City’ works at low driving speeds and targets reduction in rear end shunts often associated with whiplash neck injuries. ‘Inter-Urban AEB’ works at higher speeds and targets fatal and serious injury crashes that may be caused by driver inattentiveness or distraction. Euro NCAP tests both types of systems and scores them between 0-3 points, which translates to Good, Adequate or Marginal.

Cars tend to travel at closer distance in slow traffic which minimizes the driver’s ability to avoid a crash at the last minute. As a result Euro NCAP focuses on the automatic braking function in its AEB City tests up to 50 km/h. Euro NCAP tested low speed AEB City system performance on 6 vehicles:

In this test, top marks were earned by PRE-SAFE Brake (3 points) on the Mercedes Benz E-Class; City Safety & Collision Warning with Full Auto-Brake (2.9 points) on the Volvo V40, and Forward Collision Mitigation on the Mitsubishi Outlander (2.1 points); whereas the systems on the Volvo XC60 (1.9 points), Fiat 500L (1.8 points) and Ford Focus (1.7 points) were rated as Adequate.

At higher driving speeds, there is often sufficient time for the driver to take action to avoid the crash. Therefore, AEB Interurban systems often provide a Forward Collision Warning function with enhanced braking performance, which can be complemented with an automatic brake function in case the driver does not respond to the warning. Euro NCAP assesses the system performance both where the driver brakes and where there is no reaction to the warning for their ability to avoid and mitigate crashes up to speeds of 80 km/h. The 5 vehicles tested for AEB Interurban are:

The results in this test showed bigger differences between systems. The three best-scoring systems were: PRE-SAFE Brake (2.7 points) on the Mercedes Benz E-Class, City Safety & Collision Warning with Full Auto-Brake (2.6 points) on the Volvo V40 and Front Assist (2.2 points) on the VW Golf. The systems on the Mitsubishi Outlander rated as Adequate (1.9 points) and on the Honda Civic as Marginal (0.44 points).