In its new calendar Team spirit 2016, Spies Hecker follows the theme of the 2016 European Football Championships, which are to be held in France. The calendar presents people and bodyshops whose hard work turns vehicles into real collectors’ items. It showcases these works of art, strikingly photographed at 11 customer sites in six European countries. 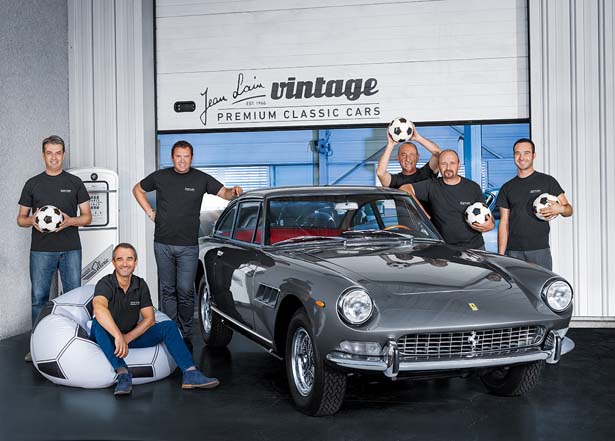 A fine Ferrari 330 GT 2+2, built in 1967, was photographed in France; a flame red 1950 Healey Silverstone was shot in Italy and an elegant 1971 VW Polo P 1800 ES took centre stage in Poland. Photographer Ramon Wink, who has been involved with the Spies Hecker calendar for many years, showcased the vehicles to their best advantage in their respective bodyshops.

In the Swiss town of Bern, Wink features a backdrop steeped in history: the gates of the Wankdorf Stadium, in which the final of the 1954 Football World Championships between Germany and Hungary was played. Wink chose this location to shoot the BMW M235i Racing, owned by Urs Boss of Carosserie G&G AG Niederwangen, for the month of March.

Anthony Cashel, Marketing Manager for Axalta Coating Systems in the UK and Ireland, says, “In collaboration with the Škoda museum in the Czech city of Mladá Boleslav, where Škoda today produces the Fabia, Rapid and Octavia models, we were able to shoot a 966 Supersport racing car for our calendar together with Milan Plucar and his team, from Škoda Auto Kosmonosy Bodyshop. The car, from 1950, is known in the racing world as the first-ever East European Formula 1 car. And this particular 966 Supersport is the one remaining model in the world from this production series, as Škoda only ever produced three.”

Applications for 2017 start now
“As varied as the vehicles may be, they were restored with immense attention to detail and they demonstrate the passion with which refinishers around the world work with Spies Hecker products,” Cashel says. Applications are now open for the 2017 calendar. Images should be emailed, by 15 February 2016, to joachim.hinz@axaltacs.com.

The calendar can be ordered from the Spies Hecker web shop, www.spiesheckerwebshop.co.uk, in the literature/poster section. Colour Club Advance members will automatically receive their free calendar as part of their colour programme update.