New data from warranty provider Händler Protect has revealed the 10 most expensive cars to repair based on real claims it has paid out in the UK over the past 12 months.

The Porsche Cayenne proved to be the priciest car to repair with average costs totalling £2,179.32.

Although the Cayenne might have been on average the most expensive car to repair by more than £800, there were only 12 claims made for this model out of more than 100,000 cars warrantied by the firm.

Fords were featured the most out of any manufacturer in the top 10. Its S-Max was placed second in the list with 68 claims and an average repair cost of £1,357.26. The Ford Galaxy came in fourth with 52 claims, costing £1,258.48 on average to fix.

The Ford Ranger was the final Ford, and the final car placing in 10th position in the list, but it wasn’t the only pick-up.

The Nissan Navara was the sixth most expensive to repair and matched the Ranger with both needing 92 claims each – the joint highest on the list.

Händler Protect works exclusively with independent car dealerships in the UK, and in each of these cases the dealer was able to avoid a significant cost to their business by taking out one of its warranties. It gives dealers a snapshot of used vehicle warranty claims in this market. 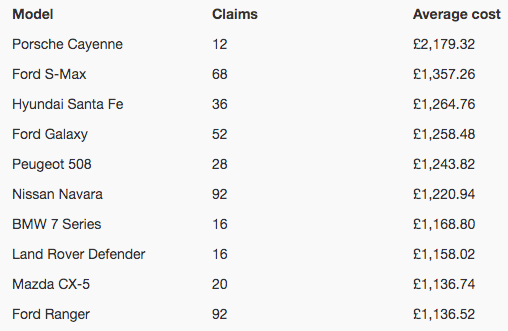 Its CEO, Lloyd O’Connor said: “For each of the cars mentioned in the top 10, we have prevented a car dealer from potentially having to pay out thousands to repair a customer’s car.

“We do our best to help our customers by not only sharing our data to help prevent issues, but we also appreciate that things can go wrong at any time. That’s why we’ll try to help out even if it’s an early claim.

“The majority of faults Händler Protect sees occur in the first 80 days after the car is purchased. A lot of claims are made just 20 days into the policy. It can be a big risk to take as a dealer and this list shows that car buyers really can have problems with any size, shape, make or model of car.”