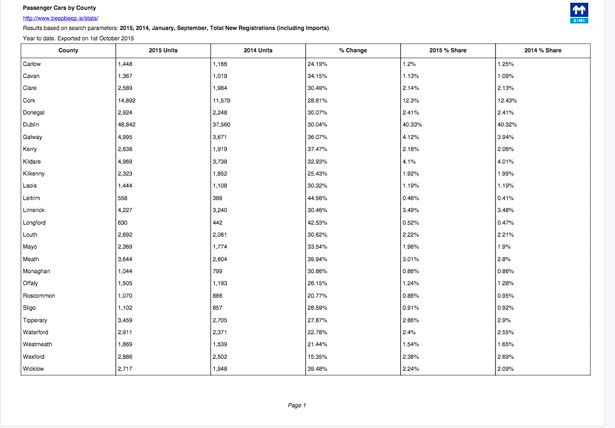 Commenting on the figurers SIMI Director General Alan Nolan said: “Like most retail sectors the Industry continues to show increased activity across all sectors and provided there are no Budgetary changes that will affect the Industry negatively we should continue to see growth in sales and employment in the Motor Industry for 2016.”

Meanwhile, Ford was the top-selling brand in Ireland’s car and van market during September.  Ford achieved a 16.7 pert cent share (1,094 units) of the overall market during the month, five pert centage points ahead of its nearest rival, VW with 11.7 pert cent or 766 units.

Ford Ireland Chairman and Managing Director, Ciarán McMahon commented. “It is heartening to see that our vehicles were again the number one choice among Irish drivers.  The overall growth in the market is still very strong with year-to-date growth hitting 30 pert cent for cars and 44.8 pert cent for CVs – that is a great indicator of the continuing strengthening of the Irish economy”.

Ford’s low emission, fuel efficient passenger models continued to find favour with Irish drivers during September, helping Ford to achieve the highest number of models in the top-ten sales chart with Mondeo, Fiesta and Focus at 3rd, 4th and 6th respectively in the top ten models for the month.

“With CV sales of 535 units, Ford vans again topped the monthly CV sales poll.  Indeed, Ford’s nearest rival in the CV sales stakes was Renault with 223 units sold – that is some way below half the sales total for Ford vans in the month.  This year marks the 50th anniversary of the iconic Transit, the undisputed king of the van market in Ireland and from these figures you can see that its popularity is showing no signs of dimming”, concluded Mr. McMahon.