The colour climbed to nine per cent of the global colour share – a one per cent increase from 2019.

The trend reinforces PPG’s 2019 automotive colour forecast, which anticipated that sales of blue automobiles would increase over the next four years. 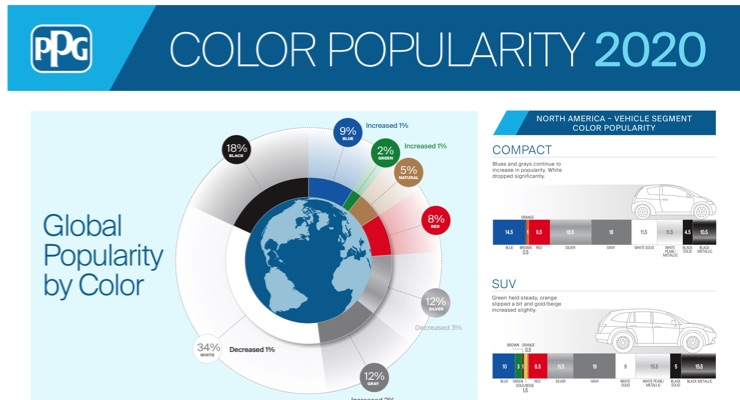 In Europe, blue occupies 11 per cent of the market. Sales of blue luxury, mid-size and sub-compact vehicles grew by one per cent across the continent last year. It increased one per cent in Asia-Pacific markets and held at 10 per cent of the colour share in North America.

In China, the purchase of blue sub- compacts jumped by four per cent and blue mid-size cars by two per cent, but the colour fell by six per cent in minivans.

As the movement toward blue continues, Yeomans expects the colour to emerge in more vivid or desaturated shades, deep-sea luxury tones and hues with a slight turquoise influence.

“Digital-inspired aqua-blues combine versatility with a sense of youthfulness and a fresh spirit,” said Yeomans. “The emergence of the electric vehicle (EV) market also will drive growth in vibrant tones and interesting effects, such as colour-shifting colours. We’re also seeing blue used more extensively in trim lines, logos and other accessorising applications.”

Consumer demand and the need to accommodate autonomous driving technologies helped white remain the world’s most popular automobile colour. While preference for white tones fell one per cent from 2019, solid and metallic shades of the colour claimed 34 per cent of the cars purchased worldwide in 2020, according to PPG’s report.

This was led by 41 per cent of auto builds in the Asia- Pacific region, which is a boost of one per cent from 2019, and 36.5 per cent in South America, where demand fell by 2.5 per cent. In North America, white metallics leaped substantially in the luxury car segment, from 21 per cent last year to 38 per cent in 2020.

“White colours also reflect consumers’ desire for refined simplicity and versatility in turbulent times,” Yeomans said. “In addition to the pearl and metallic whites that are already widely popular, we anticipate a new dimension of white stylings in the automotive market that create a warm, sophisticated feel, such as creamy shades of ivory or bone-coloured tints and ceramic effects. White colours are also highly compatible with emerging radar and LiDAR technologies that enable self-driving vehicles.”

Together, green, blue and natural shades accounted for 16 per cent of the global automotive colour share. This figure is consistent across all regions except South America, where white, silver, black and gray virtually eliminate these hues.

“Red is consistent and an important colour space in the automotive market, holding steady at eight per cent globally,” said Yeomans. “This colour will get a new push with EV start-ups due to its stand-out nature and association with sports car models. Year after year, we see high chromatic reds growing in interest.”

Holding steady at 18 per cent compared to 2019, black retained its popularity as a core colour due to its versatility and dramatic design potential.

“Effects and finishes that incorporate black tones allow for artistic reveals in the way colour shifts, highlighting hidden undertones and adding a dramatic flair to the possibilities provided by the new pigments and finishes being developed within this colour family,” Yeomans said.

Globally, a slight decrease in the popularity of silver was balanced by a corresponding increase in preferences for gray. Silver tones dropped from 15 per cent of auto builds in 2019 to 12 per cent in 2020. Grays rose from 10 to 12 per cent during the same period.

PPG forecasts that gray will remain a popular core colour for automotive stylists moving forward, driven by the resurgence of concrete and stone materials and the on-going appeal of ceramic and metal tones. The gray palette will shift toward warmer hues with brown influences, while blue-inflected grays will retain their fashionability.

The influence from nature will be apparent in silver stylings moving forward as well, according to PPG experts. Warmer and more organic tones will further reflect current consumer tastes, while also aligning with the highly compatible nature of very light tones, including whites, with new radar and LiDAR technologies.