The number 27 Porsche features a dramatic new livery for the 2015 season, complete with Nationwide and PPG branding on the bonnet, roof and side of the car.

Also on display will be a FW37 Williams Mercedes Formula One car painted in PPG refinish systems.
WILLIAMS™ MARTINI® RACING has benefited from PPG’s latest technical paint solutions that have led to an impressive 48% reduction in the weight added to the car during the painting process. By reducing the amount of paint products needed, PPG coatings can provide Williams Martini Racing with a performance advantage whilst maintaining the presentation standards expected of the team’s much talked about Martini Racing livery. 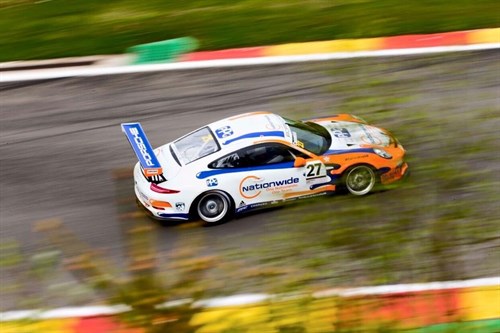 Danni Aiken, PPG UK & Ireland Marketing Communications Manager comments: á“We are really pleased to have the opportunity to promote our motorsport partnerships at the most prestigious event in the industry.
Both teams are having fantastic success on track. Dan is currently top of the leader board in the Porsche Carrera Cup GB and Williams are having a great start to the season; currently in third position in the constructor’s standings. We are extremely proud to associate the PPG brand with both Formula 1 and the Porsche Carrera Cup; and we are looking forward to showcasing the cars to over 900 guests at the event”
The British Bodyshop Awards is a unique celebration of the UK’s body repair industry where the best performing bodyshops or individuals will be recognised and rewarded.

The British Bodyshop Awards takes place on 12th May at Battersea Evolution in London. PPG have been the headline partner to the event for four consecutive years.