Experienced refinishers know the problem: as soon as winter is on its way and the temperature drops, refinish preparation work needs to be adapted accordingly.

Lower temperatures can render clearcoats and hardeners more viscous, and that makes them much harder to work with. Kevin Welling, Training Academy Manager for Standox in the UK, gives a few tips on how to achieve good refinish results in winter. 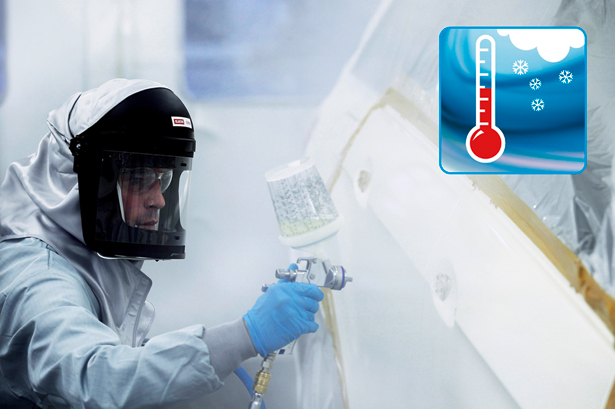 Temperature plays a critical role in many chemical processes; refinishing is no exception. That’s why refinishers need to pay particular attention to it in cold winter months. “Standox products are pretty robust. And up to a point, they are quite forgiving of environments that are not ideal,” says Welling. “Nonetheless, bodyshops should ensure certain minimal conditions are met to make sure they achieve professional results, even in winter. When storing or working with VOC compliant clearcoats in particular, temperatures should not be allowed to drop below 20oC. This simple precaution can ensure optimal viscosity and sprayability. It is imperative that water-based products be protected against frost.”

Welling’s second tip for winter applications is: “If a paint product seems thicker than usual during mixing, check its temperature and possibly also its viscosity. In most cases, the problem is that the paint is simply too cold.” He warns against additional diluting of the product with extra thinner. “That would be the wrong thing to do and could lead to subsequent defects such as orange peel effect.” And attempting to rectify this with further coats of paint generally doesn’t work. It can actually make matters worse; additional paint layers can cause bubbles and sagging.

Temperature is not only relevant for paint products and components, but also for car bodies which should not be allowed to get too cold. If they do, a fine moisture film can develop on the surface as the vehicle warms up. This can create problems with the flow, surface wetting and adhesion of the fresh paint and can lead to long-term defects such as blistering. This kind of moisture layer can make a superior result almost impossible to achieve. Welling says: “Allow the vehicle to stand in the heated spray booth for some time before starting work.”

Tip 4: Careful cleaning of the car body is crucial

Welling is keen to point out one other important factor that should be considered in winter: salt residue on the car body. It can cause troublesome paint defects – for example blistering – that might then require elaborate reworking. Such defects can only be avoided if particular care is taken when cleaning body parts. “The work is worth it. Time spent on cleaning the car body pays off later in terms of the quality and longevity of the refinish job,” Welling says. “Salt residues, incidentally, only dissolve in water, so they should be removed with a water-based silicone remover.”